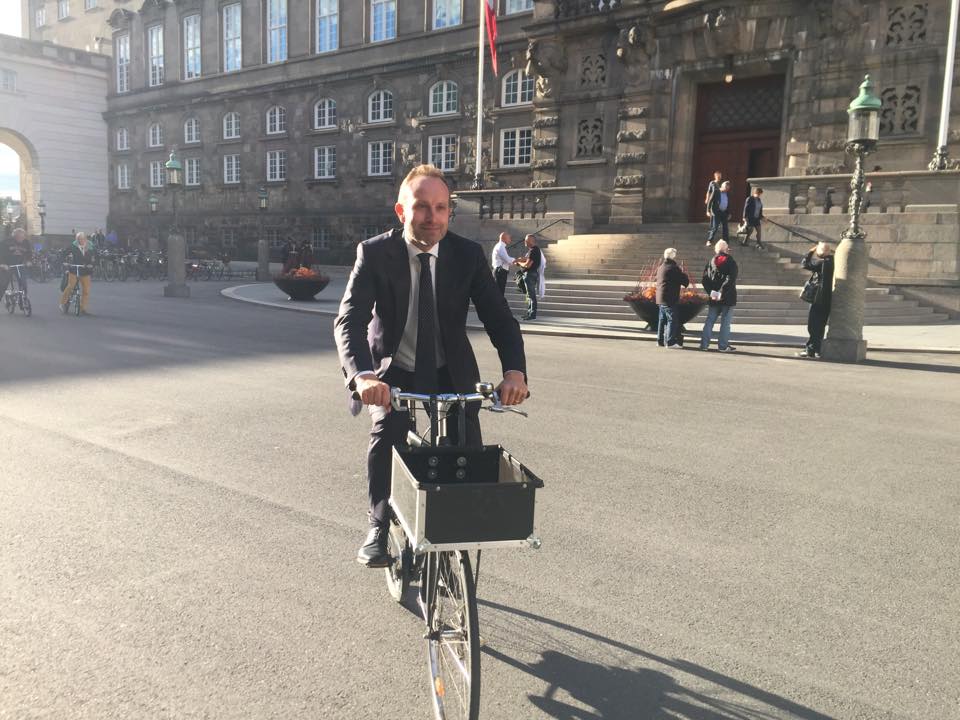 Martin Lidegaard seen here riding to work on his bicycle.

“In a time where the world experiences a drastic change in leadership, liberals must unite to deal with one of the most existential threats: climate change.” These are the words of Martin Lidegaard, the former Danish Minister of Foreign Affairs, former Minister for Energy and Climate Change and founder of the Danish green think-tank CONCITO. We interviewed Lidegaard in the offices of Radikal Ungdom’s motherparty, Radikale Venstre, in the Danish parliament building, Christiansborg.

Lidegaard starts our interview by explaining a special term he has invented for people who fight against climate change: “I have invented a term called ‘Climate change knights’. You meet them at international forums all-round the world. You know in the moment you meet them and talk to them, that they are extremely passionate about it, and that passion encourages you. They are the ones that takes responsibility of doing something about this and – with great focus on their target – they go out to do whatever they can wherever they are” He continues: “I once met a guy from the African Development Bank, that talked for hours about all the things he had done on climate change and what difference it had made for the local population. He is a true climate change knight!”

Lidegaard’s climate change career started out in 2007 when he had just left the parliament:” I had lost my seat [in the Danish parliament] at the election, and was left with the thought of ‘what now?’ when a lot of people said to me that I could become the Al Gore of Denmark and come up with some solutions on climate change. It was something close to my heart, so I took up the challenge and formed the think-tank CONCITO. “The green think-tank was the first of its kind in Denmark and cooperated with the Danish industry on how to incorporate green initiatives in their business.

When he returned to parliament as a minister of climate after the election in 2011 he used the experience to set up some unique goals for the energy sector:” I used a lot of the work I had done as director of CONCITO to make some energy policies that are still valid today and which have created results that are both good for the climate and the economy. The secret to that is the liberal market – we have a unique electricity market in the Nordic countries.”

Lidegaard not only fights the battle on climate change in the parliament. He explains that he also tries to do something active about it in his everyday life: “I try to do what I can and it also has some personal advantages. I bike every day. That’s both a very clean way of transportation and its healthy. I have also stopped eating so much meat, which is also to avoid getting fat. I think you can’t win the climate change battle if you give people the ultimatum of doing something for the climate or to live a relatively good life. You need to say to them that you can do both – but do things with reason as well. Both hope and rationality is the driving force of change.”

Background for the article:

During September the IFLRY’s Climate change programme have interviewed climate change fighters from all around the world. Inspirational people from Canada, France and the Philippines have told their stories of how to deal with Climate Change. You can read the stories on the Climate Change Programme’s Facebook page: https://www.facebook.com/iflryclimate/