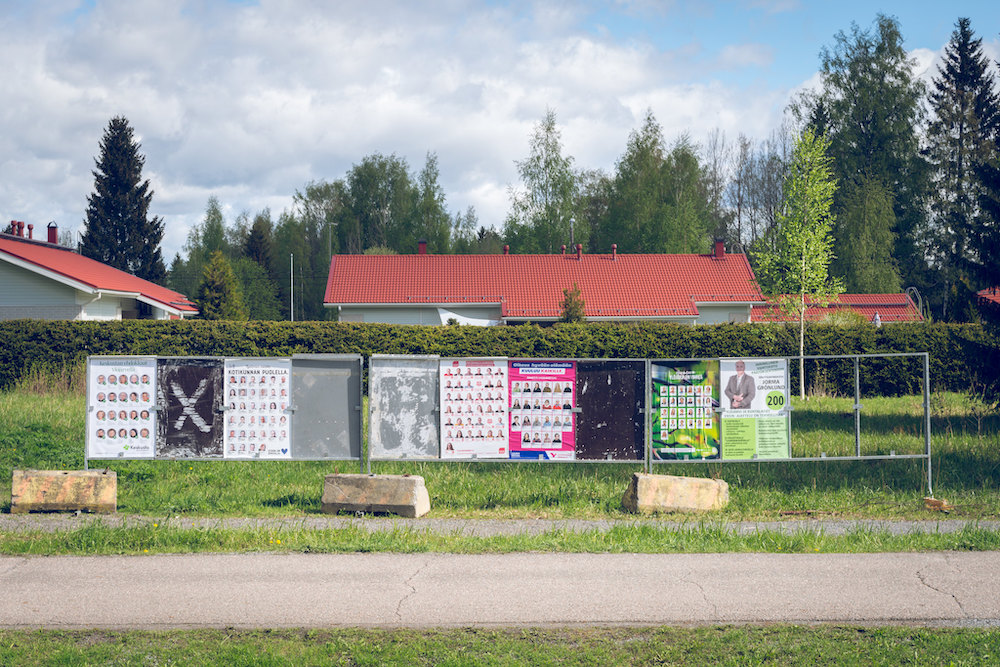 Posters of candidates in the village of Metsäkylä, close to Tampere in Finland. Source: https://flickr.com/photos/rantajanne/51193130301

I might have babbled about the Finnish local election in some of my previous posts and lucky for everyone involved, it’s now over. So, what new conversation culture am I talking about? Some would argue that I should have had a question mark at the end of the title, but I disagree; the conversation culture did change.

Now here’s briefly about the results, and I’m sorry already that I’m going to throw in a lot of names and abbreviations; I’ll indicate the party’s European umbrella party as a reference point on what the party in question stands for. The National Coalition Party (EPP) managed to get the largest share of votes for the fourth time in a row. The voter turn-out was at a record low: 55,1 %. This played an important role in the Greens (Greens/EFA) and the Finns Party’s (ID) result: both performed worse than expected because of the low turn-out. On a happier note for all us liberals, Centre Party and Swedish People’s Party (both ALDE) performed quite well: Centre won the most seats because they dominated the rural Finland and the Swedish People’s party was the only party in the current government coalition that actually gained some support. In my home city of Tampere, there was a tight race between the National Coalition Party and the Social Democrats (S&D). And despite the popular Prime Minister Sanna Marin running here, the Coalition Party won with just 15 votes.

What was new in this election? Of course, the pandemic brought its own twist as the campaigning was done mostly online and the early voting period was increased. To reiterate, the election was already moved from April to June due to the pandemic, so the campaigning required more resilience than normally. Though I must say, June was much nicer than April and I wouldn’t mind if the municipal elections were moved to June permanently.

New parties were introduced and among the best performing was the Christal Party, whose main theme was to promote vaccine hesitancy, corona denial and pseudoscience in general. Previously, the party occupied one seat due to a defector from the Social Democrats after having made a comment downplaying the Holocaust. The party failed to win any seats but still managed to get a 0,3 % share of the votes on the national level.

Then there’s the harassment. Hundreds of people reported facing threats, verbal assaults and destruction of campaign material. Especially destruction of campaign material was prevalent, despite the fact that it’s actually punishable by up to a year in prison. Harassment targeted in particular women and members of any sort of minority, so basically people who are underrepresented in municipal councils. Reading about this doesn’t really encourage people to vote, so I’d say the harassment played a role in the historically low turn-out. And apart from the candidates themselves, hundreds of volunteers who helped with sharing the leaflets, Facebook posts and whatnot were also targeted. Among these volunteers are many underage people who can’t vote yet and found another way to contribute. The harassment, and fear of it, has also become prevalent enough to scare people away from running in the election at all. People who have been in politics for a while reported that the number of hateful comments is on the rise.

The rise of populism is not yet over. Big promises were made by pretty much all the bigger parties: the Social Democrats talked about a progressive municipal tax, the National Coalition Party talked about costs of owning a car needing to be lowered. The Finns Party was on a whole new level though: the party published a bus stop ad in Helsinki implying that immigrants would be able to skip the queue when applying for housing from the city of Helsinki. The ad was removed as the point it tried to make was factually incorrect. The party also had the most candidates convicted of a crime: more than twice the average. In spring, the party was very proud of the fact that they had full lists in several places but once the papers started writing about the crimes committed, this suddenly became an issue.

The low turn-out in municipal election is nothing new, though. Finnish people tend to vote less actively in those elections where you choose the people who have the most power regarding your everyday life (aka municipal elections), and more actively in those elections where you choose the person with pretty much no power at all (aka presidential elections). But like said, the low turn-out punishes those parties who are in the opposing ends of the political spectrum: the Greens and the Finns. Meanwhile, a centrist party with a well-established voter base, like mine, was able to avoid a collapse and even make a break-through in a few new municipalities.

Considering the fact that people can be harassed into silence and the Finns Party decided that racist falsehoods would be alright for a campaign ad, the way we’re heading is bad. The liberal centrism is not in existential danger but it has a hard time to find room in this age when politics is done under the slogan of ”who needs facts when you have opinions”. One question posed in the YLE’s election compass was about the need for a code of conduct in my municipal council and I totally agree it should be a thing to do in Tampere right after the new term starts in August.