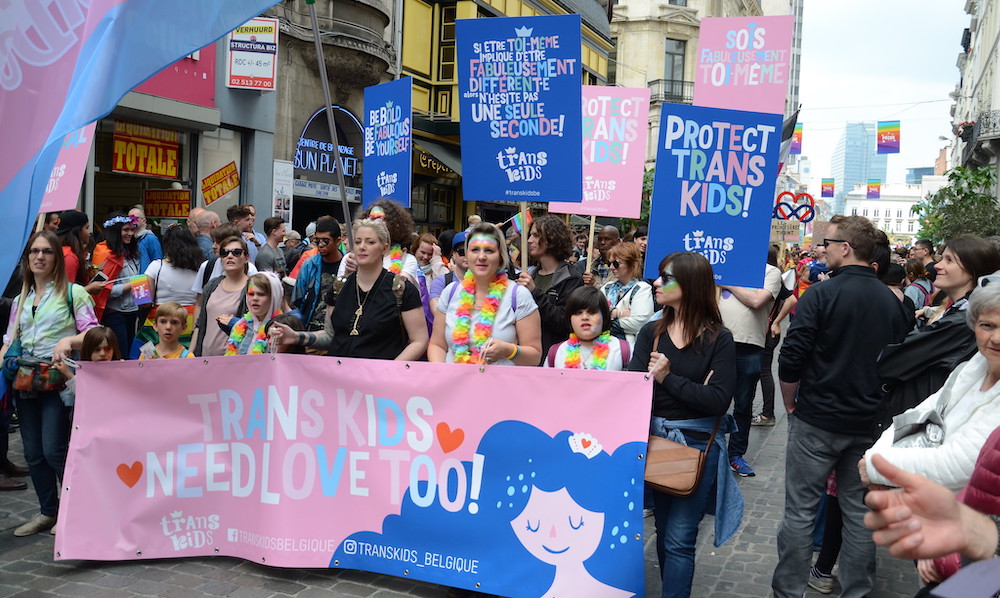 People campaigning for the rights of transgender children at the 2019 Pride march in Brussels, Belgium.

Prides occur all year long, however, June specifically is known as Pride Month due to the many Pride events taking place at this time of the year. Prides emerge and grow all over the world, and yet they are often criticized for not having a political purpose anymore. How did Pride emerge in the first place and does it remain relevant today?

In June 1969, the brave actions of Marsha P. Johnson and Sylvia Rivera resulted in a multi-day riot, known as the Stonewall Riots, referring to the bar where the uprising started. To support the Stonewall Riots, LGBTQI+ organizations called people to come out of the closet, to challenge societal norms, and to take pride in their true existence. The size of the riots, that lasted for days, gained awareness from the press, resulting in multi-day media coverage and increased awareness of the LGBTQI+ community. The Stonewall Riots instigated a major shift in the attitudes of gay people in the United States. Before Stonewall, it was the norm for gay people to keep their sexual orientation a secret. When they were outed, this was usually by others, which meant that coming out was generally something experienced as shameful. After Stonewall, more and more gay Americans decided to reject the shame that society imposed on them and found the strength and the pride to come out themselves, thereby showing that they rejected the social stigmatization of LGBTQI+ people.

A year after the uprising, the Stonewall Riots were celebrated by taking to the streets in the form of a march. More people dared to take the streets to celebrate the first anniversary of Stonewall and protest against the abusive anti-LGBTQI+ culture and legislations. This march is perceived as the first Pride march, which celebrates its fiftieth anniversary this year. Nowadays Pride has become a global phenomenon with millions of people all over the world participating in it, in every season. Yet Prides are often criticized for being a festive event without political purpose, especially in countries where there is some legal protection for the LGBTQI+ community.

However, also in countries with relatively fair LGBTQI+ legislation, Prides are still needed and are inherently political, no matter how festive the surrounding events are. This is because societies are still built upon a heteronormative construct. Simply put, this entails that nuclear families, existing of a man and a woman with children, are put central and that whenever a child is born it either is a ‘boy’ or a ‘girl’, which means that it has certain gender patterns imposed from birth. Even if a country has legislations in place that prohibit discrimination of the LGBTQI+ community or has legalized same-sex marriages, to name a few examples, heteronormativity remains predominant. Whenever a Pride takes place, and either a march or parade passes through the center of a city, public space is taken to create a stage for the LGBTQI+ community. This visibility of the LGBTQI+ community is one of the greater goods that comes along with Pride. It is because of Prides, that the visibility of the LGBTQI+ community, has increased tremendously the past five decades. Nevertheless, there remain challenges to be faced by the LGBTQI+ community on a daily basis. One example is that of coming out. In many cultures, people nowadays come out of the closet themselves, but it still remains a difficult thing to do, and it often causes a lot of stress and anxiety. Not to speak of anti-LGBTQI+ violence, such as the recent beating of two lesbian women on public transport in London, and murders – for example of the dozens of Trans people that get killed in Brazil – that still take place regularly and everywhere.

The countless counter protests occurring at Prides show the active resistance that is still out there. At almost every Pride there are sections to be found with counter-protesters. Additionally, Pride organizers commonly face serious backlashes in organizing Pride events. In South Korea, Pride organizers are pushed back by counter groups trying to block all permit-dates. In Mauritius opposing groups organized illegal counter protests on the itinerary of the Pride march, with rumors of them being armed the Mauritius Pride march needed to be cancelled. Additionally, there are numerous anti-LGBTQI+ policies still in place, such as no protection to non-consensual cosmetic surgeries performed on intersex children, except for only four countries in the world. As well as an increase in anti-LGBTQI+ policies in for example Turkey and the United States. This all shows that there is still a lot of work to do, in every corner of the world. Pride is definitely not the only possible approach to this, neither is it the holy grail solving all the issues. But what Pride can do is to mobilize people, to come together and let others know the LGBTQI+ community deserves a truly equal position in society.

To conclude, a lot has changed in the past fifty years – in most places for the better. However, as touched upon in this article, there are countless examples to give of people and societies not fully accepting the LGBTQI+ community, and giving it the rights and freedoms that follow from that. Pride challenges heteronormative preconceptions, and it will continue to do so. No matter how festive a Pride event may look, the political tension it takes to make it happen should never be underestimated. But also, never forget to enjoy Pride, a celebration of love, to the fullest possible.

Patrick van der Pas is secretary of the Human Rights Committee of InterPride and a global LGBTQI+ activist. He strives to challenge Public Policy and societal norms to safeguard the protection of Human Rights of people marginalized due to their sexual orientation and/or gender identity. Find out more about him at patrickvanderpas.com