For a long time, I have noticed that, when discussing their common ideals, it seems that Federalists are not talking about the same thing – especially so when it comes to economics. Recently however, the different responses of European Federalists to the Catalan Issue exposed divisions on the concept of federalism and pro-European ideals that go also far beyond the idiosyncratic interpretations of the historical intricacies of the plurinational state of Spain.

Indeed, while some claim that it is pointless to have many states in a united Europe, and that we should aim at further union, not disaggregation of the current states, others say that in a united Europe, national borders are less relevant and instead of the acquired legal rights of states we should be looking at the democratic will of the citizens. Also, while some say that national identities grounded in emotion (such as being proud of being a Catalan) are tribalist reminiscences, incompatible with Europe (though being proud of being Spanish, or Luxembourgish, or German are surprisingly still acceptable), others claim that there is no contradiction between defending the statehood of a nation and its integration in the European project. We end up with two opposing groups: one for whom European unity is an end in itself, and for whom national identities pose a danger to this unity; and one for whom you can have simultaneously a national identity and one supra-national identity. One where historical and cultural reality is crucial (based for example in language), and one where identity is linked with consent (such as the creation of the European federation not as a result of some cultural unity, but of the willingness to forge a common destiny with other nations).

In addition, there are much less mediatic differences. In a debate at the headquarters of ALDE Party in 2016 I had the pleasure of hearing a French senator representing French citizens in the United Kingdom. Asked by a fellow countryman and party member on why we have not yet integrated our social security and fiscal systems at a European level, the senator, a staunch pro-European free marketer, answered that we should never do that because fiscal and social policy competition are crucial to keep Europe a prosperous continent where diversity is crucial to keep a healthy economic ecosystem where different political options are still possible. Here two we face a challenge between a centralist point of view, that wants to unify everything at a European level, and a pluralist point of view, that sees no contradiction between promoting diversity and integrating politically and economically.

In short, all these people may be pro-European, and even call themselves federalists – but in “United in diversity”, some will emphasize unity and others will emphasize diversity.

Such divisions can be summarized in two respects:

I am sure the temptation to square the circle is very big. Some might try to say that there are “European values”. It is indeed a very common expression. But that implies that democracy is exclusive to Western, White, Christian countries. The Liberal in me rejects this and affirms that liberalism and democracy can flourish in any country, regardless of geography, ethnicity, language or religion and are thus not European per se. They are values that we may endorse or fight for, but they do not belong to any continent. So here there is a fundamental choice to make about what truly drives us. A choice between Europe as cultural and historical reality, or as a community grounded in values that are present in all liberal democracies.

The other concerns the concept of European integration. What should we integrate? How far should we go in merging our political bodies? Which policies should be centralised and which should be set at a national or regional level? Is integration always good? Are there limits for economic integration? What is, in the end, the concept of subsidiarity, how do we perceive it, how do we want to apply it?

Here, the choice is fundamentally between a higher or lower level of political and economic integration.

Most political nerds will be well acquainted with the bidimensional scale of the Political Compass: in one dimension the axis depicts the spectrum between authoritarianism and collective moral values (top) and libertarianism and moral individualism (bottom), the other the axis depicts the spectrum between economic collectivism (left) and radical free market (right).

With respect to the two aspects that I outlined above, the same scheme, with a similar distribution of fields, can be envisaged. 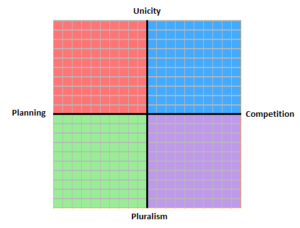 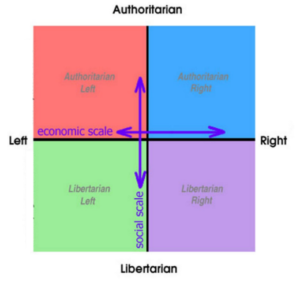 The social scale is substituted by identity: a more collectivist vision corresponds to the European nationalism, this new patriotism that accepts with difficulty any superposing identities. Current national identities are tolerated because they exist, but any new arrivals (such as stateless nations) are a danger to be eradicated. Fundamentally, Europe is a cultural and geographic identity with more or less clear limits, and the way forward is to slowly eliminate differences to guarantee the survival of the continent in an aggressive new world where Europe is no longer the dominant power. A more individualistic vision will correspond to rational Europeanism: Europe is a choice, not a destiny, and may not even be the final destiny. Europe is not a tradition to which you are attached, but a recent choice for liberal democracy that does not encompass the whole of Europe (Russia, Turkey or any ‘illiberal democracy’) and is not limited to Europe (indeed, further economic and political integration with non-European liberal democracies could be envisaged). Its legitimacy derives from consent and communion of values, and not from History or Geography.

The economic scale is even more similar. Indeed, the option is between a collective economic policy with limited freedom for countries and regions to pursue their own political choices, and a coordination limited to key elements with the European institutions facilitating the creation of transeuropean markets, that is, where regulatory uniformity does not lead to tax harmonization or a European welfare system.

Using the scale above serves a fundamental purpose with which I would like to end this opinion piece. My purpose was to shed some light on the diversity of perspectives within the pro-European and Federalist movements, and in that way to clear the path to dialogue by brushing away some ideological self-righteousness that can be seen in all idealistic movements, regardless of being on the Right, Left, or, in the present case, on the Centre of the political spectrum.

Also, it is clear that the descriptions above are extreme cases – I am sure it is hard to find anyone that would want to eliminate all European nationalities, right now, and substitute them by a European nation, or in the other extreme case, someone that would want to change the EU right now and open the doors to other liberal democracies – even if many of us are delighted to have Australia at the Eurovision Song Contest.

Despite identifying myself with the pluralist and pro-competition perspectives, I think all four perspectives do exist and find a significant number of followers among pro-European forces. Hopefully, this would allow people to be earnest concerning their positioning within the movement and allow more constructive approaches to the internal debate.

Igor Caldeira is a former Board Member and Secretary General of LYMEC. He is currently Treasurer of the European Liberal Forum, and serves as European representative on the Board of IFLRY. He is an Individual Member of LYMEC and the ALDE Party.