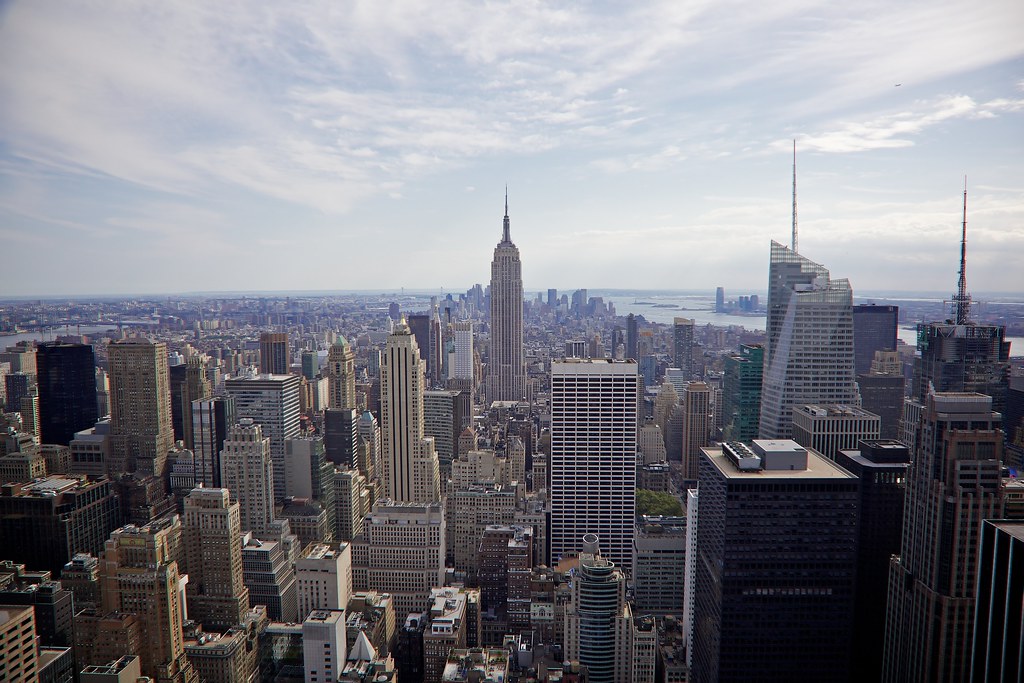 View from Top of the Rock

Since my childhood I’ve imagined New York to be a place full of life and color, where people go to make their dreams into reality and, finally, at the age of 19 I got the chance to visit the great city. As a person who has a left leaning ideology and a great interest in global politics, New York was no less than a pot of gold for me. Although I belong to Karachi, which is also a cosmopolitan city and where many communities live together, unfortunately this hasn’t been a success story like NYC.

Now, if you want to immerse yourself in the magic of New York, you might need the services of a local New Yorker. For me, this was Sam Hudis, a member of the Young Democrats, the youth wing of the Democratic Party, and a resident of Manhattan. As we both had political backgrounds, most of our discussion was centered on political issues that were important to the interests of both Pakistan and the United States.

We met for the first time in the borough of Queens, the place where the current President of the United States, Donald J Trump, was born and raised. Driving around in his Volkswagen, I noticed that Sam wanted America to be a bit socialist, moreover, he was an expert in debunking conspiracy theories.

The thing that caught my eye the most is that in NYC, specific ethnic communities live separately in clusters giving little room for coexistence. For example, in Jamaica, which is a part of Queens, the place where I stayed for a week, was mostly dominated by South Asians and you could not find another ethnicity in the area; similarly, another area known as Flushing was dominated by East Asians. So when I hear the word coexistence, this isn’t how I imagine it to be. The city seemed to be segregated along ethnic lines, but Sam believes that’s what makes the city unique: you can have pizza for lunch at Little Italy and Chao Mian for dinner at Chinatown, with each area having its own special purpose of adding a different color to NYC.

On the next day, I took off to Washington DC, the capital of the United States. There, I got a closer look at the epicenter of American politics.

The funny thing is that a lot of foreigners, especially those who are not fans of politics, are completely unaware of the difference between the White House and the US Capitol, although I too agree that both are white.

Upon returning to NYC, I had the honor of using the world-renowned New York Subway, however was more than disappointed.

Now I know that the city’s transportation services have been stressed, but I don’t think that’s an excuse, because there are cities larger than New York City, such as Beijing and Shanghai, yet the metro system is quite modern and well developed. Then again, there’s this popular opinion that the NYC subway is quite old as compared to the new cities, although that still doesn’t explain the lack of sanitation, which has nothing to do with being old.

I met Sam for the second time at Bryant Park, Manhattan. The park is located just adjacent to the New York Public Library and was named after William Cullen Bryant, an Editor of the New York Evening Post. A nice and cozy place surrounded by numerous skyscrapers, you can even get a view of the famous Empire State Building from the park.

There’s also an ice skating rink in the middle of the park.

Having already explored more than 4 states and having had visited the American capital, I now had a better understanding of the United States than when I met Sam for the first time. As I like to call it, we went for a little walking adventure of “Exploring New York on Foot”.

I asked Sam why it is that almost all democratic cities are having trouble tackling poverty, high crime rates and gang violence, and why do people believe that the Democratic Party has turned cities such as Detroit into dumps.

If I remember correctly, Sam replied that it’s about perception; that in reality, these so-called underdeveloped democratic cities were in this shape because of the bad policies of the Republicans when they had been in charge, and that the Democratic program  appealed to those that are poor and disadvantaged, and that therefore those that voted for Democrats in these cities were actually looking for a way out of the mess that the Republicans had created.

On our way to the Flatiron Building, we stopped for a doughnut at Penn Station (in full: Pennsylvania Station). I was told that the Penn Station’s original structure was demolished and the current Penn Station was actually built recently. From there we went to the Madison Square Park, a place where I got to practice my Chinese with a group of ethnically Chinese people that were mediating.

It was good to see that all ethnicities are united under the American flag, unlike how the far right presents them.

Almost a kilometer ahead, there was a statue of Mahatma Gandhi, a non-violent activist that struggled against the British for the independence of India, placed in the Union Square Park. This shows you how New York City respects those who respect peace and value human lives.

I bid Sam goodbye near the Union Square Subway Station, a few hundred meters away from New York University.

On my way back, I met a group of Animal Rights activists in the union square subway station –  they called themselves Anonymous for voiceless –  and they wore Guy Fawkes masks and held up screens which showed how animals are being exploited just to fulfill human desire. I had a little debate with one of their members on how they plan to achieve their goals.

In the end, I can say that I found New York to be very open-minded, accepting and innovative. It is a place where each person’s opinion can differ from the others, but still be respected. It is a place where you can freely discuss sensitive topics such as anti-Semitism, terrorism and racism in public places just as me and Sam did while sitting in a local KFC. Other than that, I found NYC to be very global; if someone were to ask where is the capital of Planet Earth, I would point to New York City. It isn’t really about the infrastructure or glamour, it’s about the atmosphere, and, in my opinion, having visited numerous cities around the globe, New York had a vibe that cannot be found any other place.