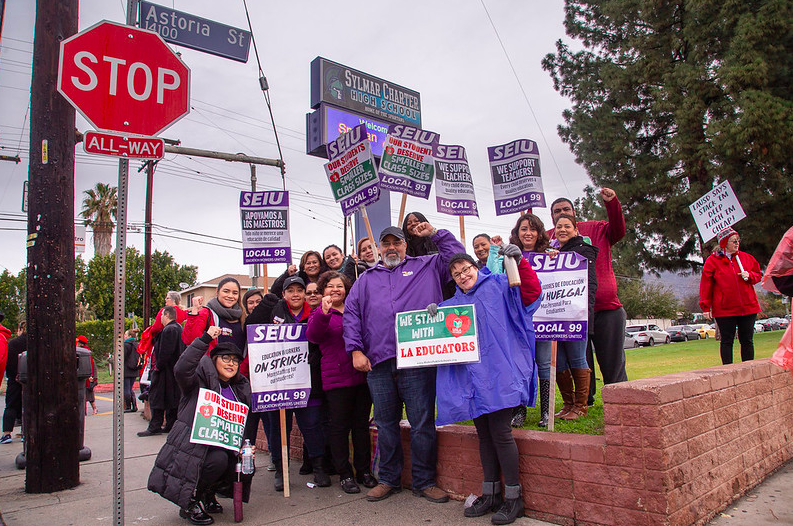 Strikes. Strikes. Strikes Everywhere. That is what millions of people all over the world are witnessing across six continents in a global phenomenon that goes back to at least 2018. These strikes share one defining feature: educators, students, families, and communities fighting to defend the institution of public education in their respective parts of the world.

Public education is as cross-sectional as an issue can be – intersecting in some way shape or form with every conceivable policy issue. From climate change, to immigration, to animal rights, education touches all issues that we see in our day-to-day lives. It affects us in our entirety – not just as students, teachers, or parents, but as immigrants, patients, renters, etc. It is no coincidence therefore, that education is a policy issue that is very easy for anyone to form an opinion about, even if they do not have children, work in education, or are students themselves.

Despite public education’s iniquitousness in our lives, it has become less and less of a priority to uphold for policymakers.  No matter the country, there are two distinct yet overlapping themes that are constant: underfunding and privatization. Take the demands of protestors in two cities as examples: Los Angeles, California, USA, and Bamako, Mali. Although they are almost on opposite sides of the world, in countries in very different stages of development, there was no shortage of overlapping demands in both those cities, including but not limited to an increase in school funding, improved working conditions, and safer learning environments for students.

Such demands are not unusual during a common education strike. But what is unusual about the two aforementioned cities, and many others around the world, is the increasingly expansive view that advocates are taking when thinking about how complex policy issues overlap with education. Things like immigrant rights, environmental justice, housing accessibility, and transportation accessibility weren’t traditionally items that fell under the jurisdiction of collective bargaining negotiations between the government and trade unions. Weaving these issues into the process of collective bargaining on education, represents a push back against the structural conditions that leave our places of learning moribund and incapable of helping children realize their full potential.

Since 2018, there have been known strikes in more than a dozen countries, made up of countless municipal and local actions within those countries.[1] These include (but are not limited to):

Several of these strikes have been resolved, with varying degrees of success for what advocates were fighting for. It was not, however, politicians who have been leading this wave of actions in defense of public education. Rather, the vanguard of this movement is formed of educators and allies (e.g. parents, students, community, etc.) committed to making education justice and socioeconomic equality a reality. I use educators not just to refer to teachers, but in a broader sense that captures support staff, cafeteria stuff, bus drivers, tutors, and everyone that makes it possible for schools to function.

In the United States, this recent national struggle for education justice has gone on to be known as the “RedforEd” movement. Though spread out across the country, and responsive to the unique needs of individual committees, RedforEd strikes collectively challenged the nation to think about how much they valued public education. In turn, they also called into question whether the government was fulfilling its part of the social contract with fidelity.

The case for privatizing public services has been made by philanthropists, corporations, and neoliberal politicians under the guise of “reforming” them. Common buzzwords and phrases espoused by reformers of public education such as “efficiency”, “saving costs” or “less bureaucracy” are designed to frame public education as a failing institution, and that the only way to fix it is to do a “reset”.

Reformers often look at the privatization of public education through one of two lenses. The first are individuals and organizations who have altruistic intentions about improving public education. Operating out of a desire to “innovate” schools, they typically call for novel practices to be introduced in schools, such as strong discipline, the adoption of new instructional technologies, and more. There is a second, more problematic lens that other reformers take. As opposed to viewing education as something to fix, another group of reformers look at schools and see money that they could be making by having a school that utilizes a privatizer’s own food services, security services, and other “add-ons”. Both classes of reformer / privatizer are ultimately disruptive – children are not laboratory subjects that deserve to be subjected to niche ideas, or be caught up in conflicts of interest that disrupt their lifelong learning.

Strikes by educators didn’t start in 2018. But the strikes we’re now seeing are more reminiscent of the militant actions of old that extracted large concessions on behalf of the working class, including things that we take for grant like minimum wage, health care benefits, social security, and 4 or 5 day workweeks. What this means is that the people on strike are doing more than just striking against the status quo; they are recognizing their place in the broader fight for dignity and socioeconomic justice. And in doing so they have made it clear to their communities and governments that public education is a fight worth fighting for.

Much work remains to be done to ensure that this awoken consciousness spreads to more workers and communities. Only then will we build progressive movements that will not just spur progressive policy and the election of more progressive elected officials, but fundamentally change the way that we view each other and the dignity of our labor. Though separated by oceans, our challenges could not be any more similar. From the classrooms, to the streets, to the very halls of political power, we are watching as educators demonstrate how mass direct action by communities will save the world. And what a lesson it is.