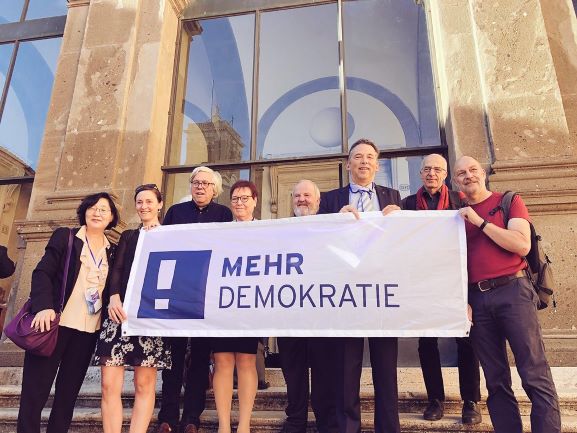 As a Swiss Citizens, the European Union may look like a big intransparent political machine that decides from Brussel what European Citizens have to do and how strong a vacuum cleaner has to be. The different European institutions, such as the “European Council”, the “Council of the European Union” or the “European Parliament” are, for an outsider, as the Swiss are, not completely relatable to our political institutions. From this lack of information, the majority of the Swiss people have reservations, if not a negative attitude towards the EU. This is reinforced by the lack of a voice for citizens, which is so self-evident in Switzerland.

I. Current direct democratic situation in the EU

Europe has a long tradition of direct democracy and is the continent with the greatest experience of citizen participation. Of a total of 1405 national referendums documented worldwide since 1793, 62 percent have been held in Europe. The first attempts at direct democracy were also made at the transnational level. The European right of initiative is an instrument of participatory democracy that enables European citizens to propose concrete legislative changes. A European Citizens’ Initiative enables citizens from different Member States to come together on a subject close to their hearts in order to influence EU policy-making. In order to launch an initiative, 7 EU citizens living in at least 7 different Member States are required. Once an initiative has collected 1 million statements of support and reached the minimum number of signature in at least 7 Member States, the European Commission must decide whether to take action. However, this instrument only leads to voluntary intervention by the European Commission and can be completely ignored by it.

Although Europe enjoys a great experience in direct democracy, the political reality in the EU is different. Apart from the voluntary European Citizens’ Initiative, there is no possibility for transnational political participation by citizens. Integration in the EU is equated with increasing centralism and increasing numbers of regulations, which is contrary to direct democracy.Since the 1980s, the European Union has focused increasingly on growing closer together. The institutes of the Union are increasingly equating the unification of the European countries with standardization. This has the effect that regional peculiarities are assessed by the authorities as damaging to the market or as disruptive factors. More and more attempts are being made to eradicate these peculiarities and to give Brussels more decision-making powers.

The problems arising from this centralism are manifold. The German journalist Henryk M. Broder even goes so far as to say that the European Union is not threatened by European critics, but by the European institutions, which are working towards further centralisation.

National governments can also set up unnecessary regulations or deal with huge administrative budgets, but the regional proximity and the greater value of their own vote in elections make this more bearable for many citizens. In the EU founding countries France and Italy, confidence in Brussels is only one third.

II. Benefits of direct democracy in the example of Switzerland

Another positive characteristic of direct democracy seems to be tax morality. In a 2002 study, L.P. FELD and B.S. FREY demonstrated that the greater the say of citizens in a county, the fewer taxes are evaded. This result suggests that citizens in a directly democratically governed county are more satisfied with the public services offered, and this with a lower administrative budget for the county. According to this, direct democracy leads to greater administrative efficiency.

As these examples show, there is a wide variety of papers that are proving the benefits of direct democracy. In the important key figures for a government, it turned out that direct democratic governed countries achieved better results. Overall, the population was happier the more say they had in the political matter.

III. Possibility of direct democracy in the EU

One consideration with regard to direct democracy is that an introduction in the European Union would lead to discriminatory decisions. During my studies abroad in London, I was repeatedly confronted with such concerns. Brexit, in particular, was chosen as a negative example. A step-by-step introduction to the direct democratic instruments would, therefore, be worth examining from my point of view.

Since the European Parliament wants to prevent its own laws from being rejected by the people, broader majorities are sought in Parliament and the laws are prepared more carefully. This would prevent any rushing forward against popular opinion.

This article is adapted from an earlier one that was published here: https://www.liberalforum.eu/wp-content/uploads/2019/11/Make-Your-Choice-Liberal-Visions-for-Europe.pdf