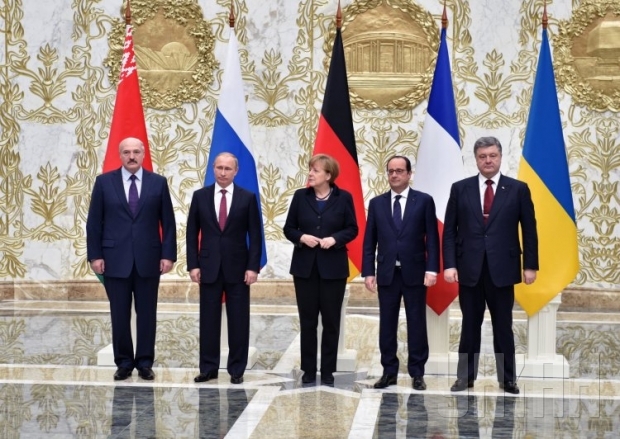 Before starting the discussion about the actual situation in Ukraine one has to become acquainted with the distinguishing features of the political system in Ukraine:

Stratfor, the US American analytical agency has stated that the “…Ukrainian government is under pressure of Russia and pro-Russian separatists on the one hand, and of the nationalist organizations on the other. The more Kiev yields to one side, the more provoked is the other one.”

On Monday, August 31st,  the Ukrainian parliament preliminary adopted the changes in the National Constitution concerning the decentralization of Ukraine, which is considered to be important for two reasons – firstly to fulfill one of the of the Minsk agreements, and secondly to continue the reform process to gain positive appraisal from the West. The changes were adopted, although the coalition parties Batkivschyna (the party of the famous Yuliya Tymoschenko), Samopmich (a new-type ofUkrainian party with open party lists which has achieved enormous support during the last parliamentary elections) and the Oleh Lyaschko Party (the only populist nationalist party which got into the parliament) refused to vote for the changes.

Sadly, the way the work of the new parliamentary coalition doesn’t bring any good to the country. At the time of war in the East, the inner problems have caused a next level instability in the country. Violent protests in front of the Parliament under the flags of the nationalist party Svoboda, Pravyj Sektor and Samopomich, where three policemen were killed and more than 100 injured, have proved that the interests of the party leaders =owners are not correspondent to the interests of people. A confused president, paralyzed after the collapse of the parliamentary coalition Cabinet of Ministers, keeps blaming Russia. “Russia is trying to destabilize the situation in Ukraine, using the right wing extreme groups”, -Poroshenko.

Although Ukrainian politicians are trying to prove democratic changes in their country- reform of police, tax and legislation systems, of the inner structure of the state, behind the picture of reform there is still the same rotten oligarch system, where the power-thirsty individuals speculate and play with the future of millions of people.

Reincarnation of the old faces in the newly founded parties (obviously financed by oligarchs), or of the old parties changing their programs, using an enormous amount of resources for their electoral campaigns, constant tricks in the parliamentary coalition, disagreements between the president and ministers is what the political field in Ukraine looks like. Behind the pretense of democratization invisible internal political threats are hidden, which are much more destructive then the external ones.