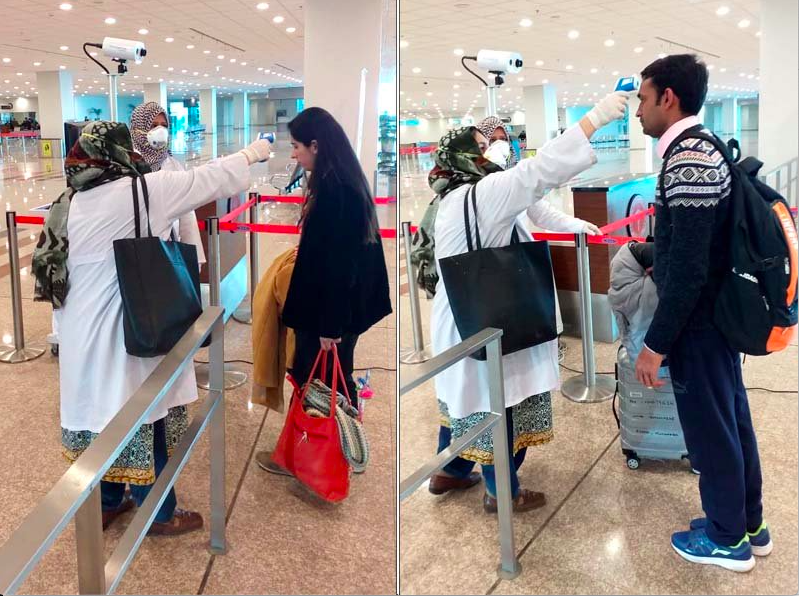 Travellers being checked for fever at an airport in Pakistan.

Since the public revelation of NCOVID19 in January 2020, there has been a steep rise in cases of phobia induced racism all around the world. While it’s normal for people to fear the unknown, what makes things worse is the spread of fake news and wild conspiracy theories. I came back to Pakistan (my home country) from China in February after studying medicine in the country for two years. Since my return to Pakistan people have been “revealing” previously unknown things to me. For example: “The coronavirus is a Conspiracy against China to decimate their rapidly growing economy and the coronavirus was actually manufactured inside a lab in Wuhan deliberately”. These theories can easily be debunked if you have some knowledge about viral outbreaks. As a medical, student I understand that viral outbreaks of such intensity aren’t a one in a million year thing, we’ve had plenty of outbreaks before but the reason why this looks more devastating is that the world economy is more global today than ever before, and closing of trade routes or cancellation of flights at such a scale can bring an economy down to its knees. Moreover, the presence of social media and the internet means that information can spread much faster than before, so its highly likely that your ancestors might’ve gone on with their daily lives during even worse outbreaks without even knowing a thing about it.

The phobia and disbelief in government is making some turn towards alternative or placebo medicine for safety from the virus. The actual effects of such medicines are unconfirmed whether they work or not and what risks are involved. Just recently a number of people lost their lives in Iran because they were told that toxic alcohol can be used as a medicine against the virus. The alcohol contained toxic methanol instead of ethanol. In Khuzestan province of Iran more people have died from the ‘supposed cure’ than the virus itself. Similarly, some people in Pakistan had turned to onions and garlics for a supposed cure. The amount people who believed this supposed cure was so alarming that the Pakistani media and health institution stepped up to debunk the hoax.

Things like racism and hate speech have been common against those of East Asian origin during the current viral outbreak of Coronavirus. In another a turn of events, people in some parts of the world are acting racist against their own people, mostly due to fear and fake news.

For example in Novi Sanzhary, a town in Ukraine, was rocked by protests when the locals heard that the government is planning to quarantine Ukrainian evacuees from China in a nearby facility. Even though the Ukrainian government had already revealed that the evacuees were tested twice for the virus before being allowed to board the flight home. Eventually, the evacuees had to wave Ukrainian flags from the bus they were on, to make the protestors understand that they are the same people. According to the Ukrainian government, there was an email originating from outside the country which was circulated. The email claimed that there were already 5 coronavirus cases in the country even though at that time the government was yet to confirm any such news. The timing of the email was when evacuees were being brought home, this triggered mass hysteria among the local population, which made them come out onto the streets. This made it much more difficult for the government to handle the crisis at hand, because now they have to deal with uncooperative rioters as well.

Why was China more successful in maintaining quarantine?

Prisoners in Italy are defying a government lockdown, which is put in place countrywide to prevent the virus from spreading elsewhere. The prisoners are furious that they won’t be able to meet their loved ones during the lockdown period. Since the Schengen Area has open borders, its easy for the virus to spread to other countries undetected. On the other hand, China saw no such mass demonstrations or violent riots when they imposed a similar quarantine on the province of Hubei, where the outbreak originally began. It seems that authoritarian governments, like that of China are better organized – mainly due to their strict governance, which unfortunately takes away human rights from the population. However, during times of crisis, authoritarian governments do not have to indulge in politics to take extreme measures, meaning they don’t have to get prior approval from parliament or the cabinet which again takes away basic human rights from the population in many cases.

As far as my own experience is concerned, the Pakistani authorities are doing an okay job, but what they lack is professionalism and courtesy. The thing that differentiates this case from the ones mentioned above is this time it’s the government officials that are lacking professionalism due to fear. Since most of the travellers coming from China are actually not coming straight from China, but instead take alternate routes, such as stopping over in the UAE, it’s not quite obvious who is coming from China and who’s not. Yes, the immigration officials can check their passports but the issue is that they don’t really bother. If it is a green Pakistani passport then it’s quite obvious that the person is a Pakistani citizen, so they don’t really bother investigating the passport much. Once you’re stamped, you’re ready to enter the country. Therefore, you have to rely on the traveler’s honesty. The only reason I was forced out of the line was because I informed them that I had come from China through the UAE, I had a chance to lie about my travel history and just tell them that I am coming from the UAE, just like how my peers did, but I wanted to give them a chance. Unfortunately, I was treated like a terrorist. Again, what they did was necessary, however being calm and professional is important in such a situation. The problem is that if the authorities act in such a way then a lot of people will try their best to conceal their travel histories.

Note: This is my personal experience therefore it’s hard to generalize. The experience of other travellers can be different. It’s been a month now since I entered Pakistan so it’s possible that the scenario is not the same anymore, but this did happen.

All in all I do believe that one must take necessary steps for prevention. I also believe that fear can help people to be better prepared for the worst-case scenario. However the issue is that unnecessary fear – mostly driven by fake news, conspiracy theories and superstition – clouds a person’s thinking and judgment, which consequently makes it difficult for the responsible authorities to beat the pandemic. Therefore governments around the world, even the one here in Pakistan, have been warning people not to share any news without confirmation.