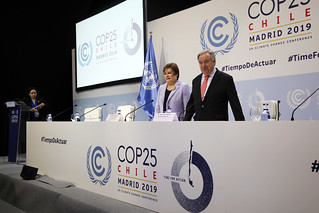 COP25 was held in Madrid between December 3rd and14th. It was supposed to take place in Santiago de Chile but because of the political situation the Presidency of Chile cancelled just one month before COP, and for a while it was unclear if the summit could be arranged.  Luckily, though, the Government of Spain took the chance of hosting the summit in Madrid with just one month to set it all up.

“Never have I seen such a disconnect between what the science requires and what the climate negotiations are delivering in terms of meaningful action. Most of the world’s biggest emitting countries are missing in action and resisting calls to raise their ambition.” – Alden Meyer, Union of Concerned Scientists

The first week of COP consisted of negotiations between scientists and climate experts from governments, universities, think tanks and NGOs around the world. Most importantly, civil servants tried to find common ground on technical parts of the negotiations. During the second week, the ministers arrived and took over the negotiations to try to solve the hard political questions.

Under the slogan #TimeForAction, this COP was called the “implementation COP”, because the mission was to find an agreement on all the technical standards that were not agreed on in the Paris Agreement. In fact, the Paris Agreement was signed in 2015, and 2020 is the year when the agreement will begin to be implemented on the national level. Before COP26, all the countries have to come up with their National Determined Contributions (NDCs). The standards for these NDCs were discussed during this COP and the more ambitious they get, the better for the climate and our future. The most important transition will be in the cities, because they consume 80% of global energy and generate 60% of greenhouse gases. But, of course, the agreements need a consensus among national governments. The climate emergency is a fact and the need for sustainable policies for a decarbonized economy is an urgent need.

For this COP, the biggest concern was around article 6 of the Paris Agreement. This article covered the rulebook around the Carbon Market and was supposed to be decided in Katowice last year, but was postponed to be agreed on in Madrid. The purpose was to establish rules on how countries can create a global carbon market to provide financial incentives to encourage the world’s nations to raise their emissions-reductions ambitions. The big debate here was whether the rules would accept double counting or if the emissions from the last protocol  (the Kyoto Protocol) could be “moved over” to the new counting. Unfortunately, countries like Brazil, Australia and China were the biggest opponents to an ambitious rulebook around the carbon market and wanted to keep the quota from the Kyoto Protocol. This was a big threat for moving forward and would have undermined the ambitions of the Paris Agreement. Most of the environmental NGOs at the summit reacted very negatively to this.

For the Global South, one big question concerned loss and damages. In short, the Global South demanded  more financial support by the Global North to actually pay for the damages resulting from environmental changes linked to climate change. There is already a mechanism for this, but the funds are not big enough according to many countries in the Global South.

Unfortunately, the ministers were unable to agree on what was COP25’s big issue – Article 6. Although the negotiations were extended  for a few days, an agreement was impossible to reach. Countries such as Brazil and Australia blocked the negotiations because they wanted to allow double counting and for the Kyoto Protocol quota to be included in the new emissions trading system. Despite the hope that a compromise would be made at the final stage of the summit, the negotiators didn’t reach a result. Therefore, Article 6 is being moved to COP26 in Glasgow next year. Many countries and NGO’s saw this as a victory and the term “no deal is better than a bad deal” was established during the week. All the countries couldn’t agree on how a rulebook on Article 6 would look like, and it was better to keep the rules as they are today rather than having even softer rules that would lower ambitions.

One step forward, two steps back
Despite the demand for action from young people around the globe, with Greta Thunberg as the most prominent,and comparatively progressive powers like the EU (which published the European Green Deal to push the negotiations forward), the summit was a disappointment. Probably, we had too much hope in this COP, forgetting that national interests often get in the way of global challenges. One of the main complaints comes from millions of young people who have taken to the streets demanding immediate action to guarantee a future for our planet. The positive part of COP25 is that, despite not reaching a consensus among governments, it has aroused the collective consciousness of people around the world to mobilize and fight against climate change. At the end of 2020, when world leaders meet again in Glasgow, it will have been 5 years since the Paris Agreement was signed. Now, in 2020, we have no excuses not to take the next step forward to reach the 1,5 degree goal of the Paris Agreement.

I feel very privileged to be a part of IFLRY’s delegation to this year’s UN climate talks, COP25, in Madrid. As a first timer to the conference, the experience can be overwhelming, yet there is a strong sense of community and camaraderie among the international liberal delegation attending the COP – with everyone helping to guide each other through the daily briefings, events, media and actions.

With the release of the World Meteorological Organization’s report on the State of the Global Climate in 2019, it is clear that now more than ever, we need immediate and effective action on climate change to protect the health of humans and the planet. Yet to date, the response has not been fast enough or bold enough. With many environmental events happening throughout the conference this year, people are starting to recognise the link between human activity and global warming.

Yet, in my home country Poland, our government has failed to implement any kind of policy to protect people’s well-being from the impacts of climate change. In fact, our government won’t even acknowledge the link between climate change and the unprecedented bushfires that have ravaged Australia and the Amazon Jungle in 2019 and 2020.

This comes along with the Prime Minister’s highly inappropriate decision to withdraw Poland from the European Union’s carbon neutrality policy. Along with the rest of the ILFRY delegation, I will continue to push the pro-ecological message after COP, and look forward to being joined by my fellow delegates in the next few days!