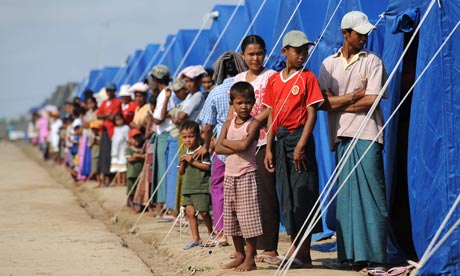 Last year saw the largest number of refugees worldwide since the Second World War, and this year the numbers don’t look to be reducing. There’s an aspect to this crisis which isn’t accounted for within the UN Convention on the Status of Refugees, but which is already happening, and will only continue to grow as climate change increases. The realities of climate change as a conflict trigger and links between climate change and the conflict in Syria have already been shown. But climate change doesn’t just force displacement from the conflicts it initiates.

Already, people are having to leave their homes because of man-made climate change; desertification, salt-water intrusion and erosion from the rise in sea levels, and there are increasing numbers of people displaced by climate related natural disasters.

The scale of the problem is overwhelming. In 2009 it was reported that climate change could create 150 million refugees by 2050. That’s a huge proportion of the global population forced into leaving their homes because climate change has made them uninhabitable. Currently,  ‘climate refugee’ is not a status recognised in the 1951 UN Convention on the Status of Refugees. This means that existing rights guaranteed to refugees do not apply in the cases of those displaced by climate change.

Amending the convention to include climate refugees seems unlikely, as it is opposed by the UNHCR (The UN Refugee Agency) itself. There is, however, the option to follow the example set by the 1998 Guiding Principles on Internal Displacement: these would be guidelines which, while not legally binding (and so debatably far from strong enough) would allow for the development of a universally accepted set of principles to protect and acknowledge climate refugees.

The current refugee crisis is already a key issue on national and international agendas; from prominence in national parliamentary elections, mass displacement and movement from the Arab world, to boats filled with Rohingya fleeing Myanmar being pushed back out to sea before they can land on the shore… To say the least, we’re struggling.

What will we do when numbers of those displaced by climate, without the internationally recognised rights ascribed to refugees, continue to rise?

There have also been some positive developments towards acknowledging the status of climate refugees. Just last year, New Zealand made headlines worldwide when it granted residency to a family fleeing Tuvala, an Island in the Pacific, on climate grounds. This was widely reported as the world’s first case of ‘climate refugees’, and was hailed as an indication that the era of the climate change refugee had begun. Whilst it was a positive first step for New Zealand to acknowledge the realities of climate change and forced displacement, we need to see national initiatives as a first step in moving towards universal recognition of the status of those displaced by climate change.

In the long run there can be no other option but to recognise climate refugees; whether in the Convention, a set of Guiding Principles, or another method entirely. We have a moral responsibility towards those forced to leave their homes due to climate change. We need to prove that initiatives like those of New Zealand can work, are necessary, and that they can save lives, whilst we urgently need to devise a framework which recognises the rights of climate refugees.

Harriet Ainscough is a member of the Liberal Democrats, and a former International Officer of Liberal Youth (UK). She is currently the editor of Libel.