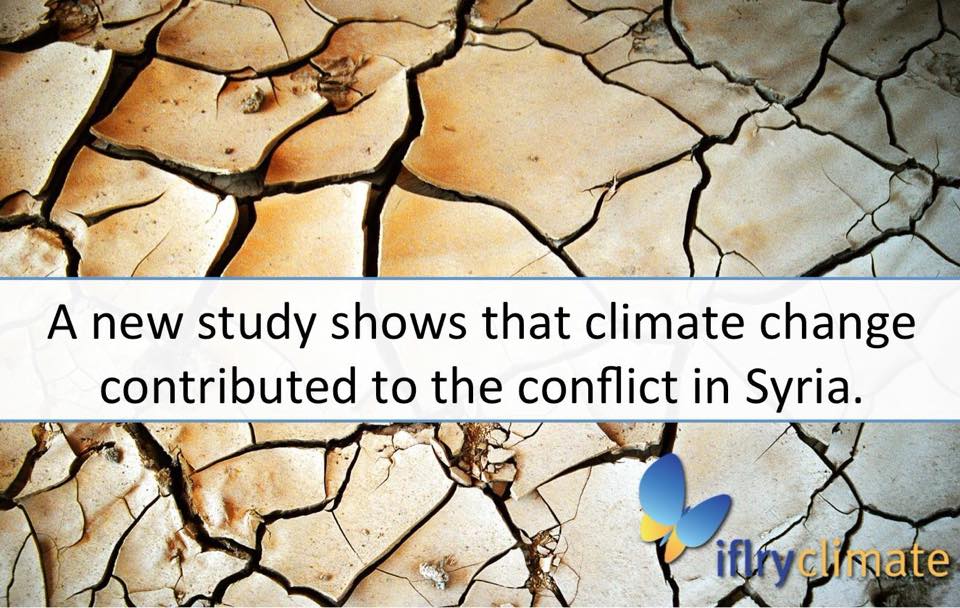 Syria is an example of something we might experience more often from now on: Climate change as a conflict trigger. A new study shows how the drought from 2007-2010 is linked to the conflict that started in 2011. Anthropogenic climate change is here shown to be the cause of several of the century-long observed trends that impacted the drought, such as change in precipitation, temperature and sea level pressure. The drought was thus either because of or made worse by anthropogenic climate change.

In a changing climate, the risk of conflict due to resources will increase. With more extreme weather, overconsumption of resources, and changing conditions for organisms and ecosystems, certain resources will become scarce. In some regions of the world, water, our most important resource, is already a scarce one. In fact, it is estimated that 1.5 billion people live in areas threatened by water scarcity. The most threatened areas are those that are heavily dependent on irrigated agriculture, or undergoing rapid urbanization or industrial development. But, as we see the increased effects of climate change, other areas will also experience water shortage, for instance because of more droughts or more severe droughts.

There are several ways in which water scarcity can lead to conflict: for instance directly through conflict over water availability or indirectly when this affects food production, causing food scarcity. Water, in the form of rising sea levels, also poses a risk of territorial conflicts. What are the people of low-lying islands states going to do when their land disappears beneath the rising sea level? Who is responsible, and what will the global society do about it? How about when a warming ocean leads to redistribution of marine resources?

The 2014 Climate Change Adaptation Roadmap report from the US Department of Defense refers to climate change as a threat multiplier:

“Rising global temperatures, changing precipitation patterns, climbing sea levels, and more extreme weather events will intensify the challenges of global instability, hunger, poverty, and conflict. They will likely lead to food and water shortages, pandemic disease, disputes over refugees and resources, and destruction by natural disasters in regions across the globe.”

Climate change is not something that might happen sometime in the future, somewhere far away, anymore. It is happening now, and it affects us all.

When our livelihoods are threatened in some way, it is a part of human nature, a part of evolution, to fight for our own survival. This makes climate change not only a direct threat through the known consequences, but also through the risk of conflict because of those consequences. But who is the ‘fittest’, and best placed to cope, with climate change in modern society? Most likely rich countries that have contributed the most to the problem, but that will see the least of the consequences. And then, who will suffer most? Countries without the economy, infrastructure, technology or systems to handle the effects. Low-lying countries or countries in areas with increased risk of extreme weather events. Countries with a high population density in those areas most affected by climate change. A higher risk of conflict will not help the people already suffering from climate change.

It is all about resources. Reducing the impacts of climate change, both through mitigation and adaptation, as well as sustainable use of resources, can help us reduce the risk of conflict in the years to come. This is truly a way of globalizing freedom, for conflict is certainly not.

Tone Bjørndal from Norway is the manager of the IFLRY climate change programme. You can follow her on twitter @tonebjorndal