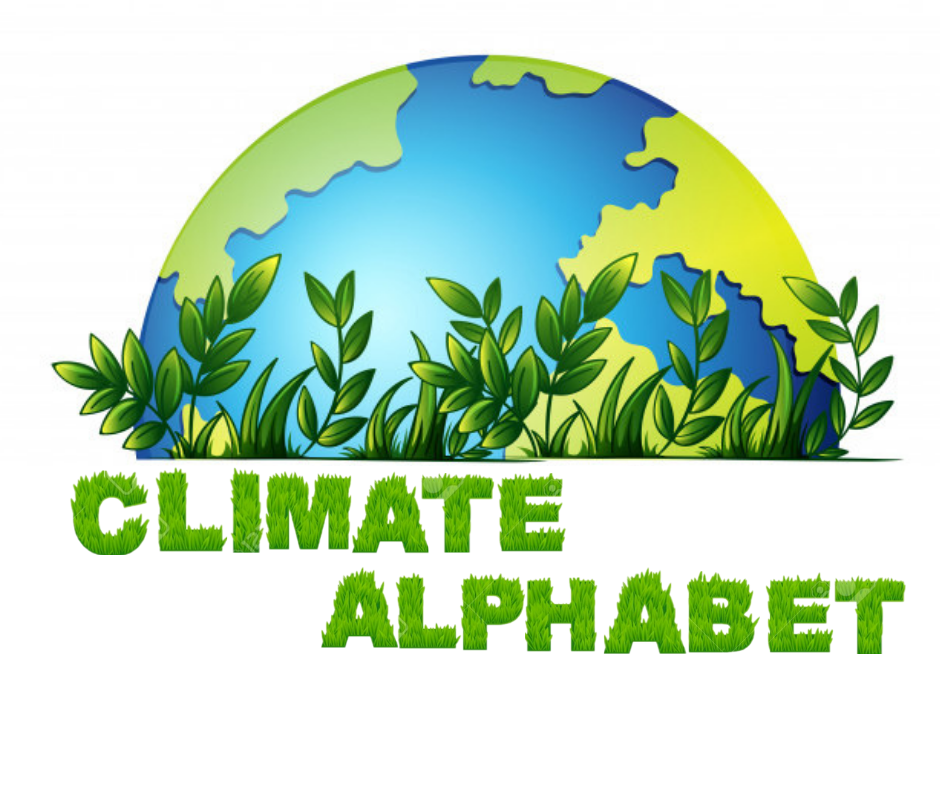 IFRLY’s Climate Change Programme recently concluded their online-project #ClimateAlphabet. Here, you can find the full (text) compilation, with explanations for key climate concepts from A to Z and reflections on the challenges each component plays presents to the overall issue:

Atmosphere is the layer of gases, commonly known as air, that protects life on Earth by creating pressure allowing for liquid water to exist on the Earth’s surface, absorbing ultraviolet solar radiation, warming the surface through heat retention (greenhouse effect), and reducing temperature extremes between day and night (the diurnal temperature variation).

Arctic methane release is the release of methane from seas and soils in permafrost regions of the Arctic. While it is a long-term natural process, methane release is exacerbated by global warming. This results in a vicious cycle, as methane is itself a powerful greenhouse gas.

Biosphere is the global ecological system integrating all living beings and their relationships, including their interaction with the elements of the lithosphere, geosphere, hydrosphere, and atmosphere.

Climate change is a change in the statistical properties (principally its mean and spread) of the climate system when considered over long periods of time, regardless of cause. The term “climate change” is not used to refer specifically to anthropogenic factors in climate change.

Cryosphere is those portions of Earth’s surface where water is in solid form, including sea ice, lake ice, river ice, snow cover, glaciers, ice caps, ice sheets, and frozen ground (which includes permafrost). The cryosphere plays a significant role in the global climate and in climate model responses to global changes.

Deforestation is the removal of a forest or stand of trees from land which is one of the main contributors to climate change. Deforestation is the second largest anthropogenic source of carbon dioxide to the atmosphere, after fossil fuel combustion. Forest degradation contributes to atmospheric greenhouse gas emissions through the combustion of forest biomass and decomposition of remaining plant material and soil carbon.

Feedback of climate change is important in the understanding of global warming because feedback processes may amplify or diminish the effect of each climate forcing, and so play an important part in determining the climate sensitivity and future climate state. Feedback, in general, is the process in which changing one quantity changes a second quantity, and the change in the second quantity, in turn, changes the first. The term “forcing” means a change which may “push” the climate system in the direction of warming or cooling.

Global warming is a long-term rise in the average temperature of the Earth’s climate system, an aspect of climate change shown by temperature measurements and by multiple effects of the warming. Though earlier geological periods also experienced episodes of warming, the term commonly refers to the observed and continuing increase in average air and ocean temperatures since 1900 caused mainly by emissions of greenhouse gasses in the modern industrial economy.

Hydrosphere is the combined mass of water found on, under, and above the surface of a planet, minor planet or natural satellite. Although the Earth’s hydrosphere has been around for longer than 4 billion years, it continues to change in size. This is caused by seafloor spreading and continental drift, which rearranges the land and ocean.

Indian Ocean Dipole (IOD), also known as the Indian Niño, is an irregular oscillation of sea-surface temperatures in which the western Indian Ocean becomes alternately warmer and then colder than the eastern part of the ocean. The IOD is one aspect of the general cycle of global climate, interacting with similar phenomena like the El Niño-Southern Oscillation (ENSO) in the Pacific Ocean.

Kyoto Protocol is an international treaty that extends the 1992 United Nations Framework Convention on Climate Change (UNFCCC) that commits state parties to reduce greenhouse gas emissions, based on the scientific consensus that (part one) global warming is occurring and (part two) it is extremely likely that human-made CO2 emissions have predominantly caused it. The Kyoto Protocol was adopted in Kyoto, Japan on 11 December 1997 and entered into force on 16 February 2005. Kyoto’s and Montreal’s ozone’s treaties have been ratified by all UN members and become the first universally ratified treaties in UN history.

Lithosphere is the rigid, outermost shell of a terrestrial-type planet, or natural satellite, that is defined by its rigid mechanical properties. On Earth, it is composed of the crust and the portion of the upper mantle that behaves elastically on time scales of thousands of years or greater. The outermost shell of a rocky planet, the crust, is defined on the basis of its chemistry and mineralogy.

Monsoon is traditionally defined as a seasonal reversing wind accompanied by corresponding changes in precipitation but is now used to describe seasonal changes in atmospheric circulation and precipitation associated with the asymmetric heating of land and sea. Usually, the term monsoon is used to refer to the rainy phase of a seasonally-changing pattern, although technically there is also a dry phase. The term is sometimes incorrectly used for locally heavy but short-term rains, although these rains meet the dictionary definition of monsoon.

Montreal Protocol on Substances that Deplete the Ozone Layer (a protocol to the Vienna Convention for the Protection of the Ozone Layer) is an international treaty designed to protect the ozone layer by phasing out the production of numerous substances that are responsible for ozone depletion. It was agreed on 16 September 1987, and entered into force on 16 September 1989. Since then, it has undergone nine revisions, and as a result of the international agreement, the ozone hole in Antarctica is slowly recovering. Montreal’s and Kyoto’s ozone’s treaties have been ratified by all UN members and become the first universally ratified treaties in UN history.

National Center for Environmental Information (NCEI) in the USA, is hosts and provides public access to one of the most significant and the largest archives for environmental data on Earth for stakeholders.

Ozone depletion consists of two related events observed since the late 1970s: a steady lowering of about four percent in the total amount of ozone in Earth’s atmosphere (the ozone layer), and a much larger springtime decrease in stratospheric ozone around Earth’s polar regions. The latter phenomenon is referred to as the ozone hole. There are also springtime polar tropospheric ozone depletion events in addition to these stratospheric events.

The Paris Agreement is an agreement within the United Nations Framework Convention on Climate Change (UNFCCC), dealing with greenhouse-gas-emissions mitigation, adaptation, and finance, signed in 2016. The agreement’s language was negotiated by representatives of 196 state parties at the 21st Conference of the Parties of the UNFCCC near Paris, France, and adopted by consensus on 12 December 2015. The Paris Agreement’s long-term goal is to keep the increase in global average temperature to well below 2 °C above pre-industrial levels; and to limit the increase to 1.5 °C, since this would substantially reduce the risks and effects of climate change.

Quality of air is an essential part of Earth’s climate according to emissions of pollutants into the atmosphere. Ozone in the atmosphere warms the climate, while different components of particulate matter can have either warming or cooling effects on the climate. For example, black carbon, a particulate pollutant from combustion, contributes to the warming of the Earth, while particulate sulfates cool the earth’s atmosphere. Thanks to Anastasia Buriak for this word

Season creep refers to observed changes in the timing of the seasons, such as earlier indications of spring widely observed in temperate areas across the Northern Hemisphere. Phenological records analyzed by climate scientists have shown significant temporal trends in the observed time of seasonal events, from the end of the 20th century and continuing into the 21st century. In Europe, season creep has been associated with the arrival of spring moving up by approximately one week in a recent 30-year period.

Sea level rise  is a climate effect, which practically means an increase in the square of the sea and a decrease of the square of land with subsequent flooding of coastal zones. The main contributor to this consequence of climate change is ice melting. Societies can respond to sea level rise in three different ways: to retreat, to accommodate and to protect. Sometimes these adaptation strategies go hand in hand, but at other times choices have to be made among different strategies.[16] Ecosystems that adapt to rising sea levels by moving inland might not always be able to do so, due to natural or man-made barriers.

UN Framework Convention on Climate Change (UNFCCC) is one of the main international environmental treaties adopted on 9 May 1992. The UNFCCC objective is to “stabilize greenhouse gas concentrations in the atmosphere at a level that would prevent dangerous anthropogenic interference with the climate system”. The framework sets non-binding limits on greenhouse gas emissions for individual countries and contains no enforcement mechanisms. Instead, the framework outlines how specific international treaties (called “Protocols” or “Agreements”) may be negotiated to specify further action towards the objective of the UNFCCC.

Urban reforestation is the practice of planting trees, typically on a large scale, in urban environments. It sometimes includes also urban horticulture and urban farming. Reasons for practicing urban reforestation include urban beautification, increasing shade, modifying the urban climate, improving air quality, and restoration of urban forests after a natural disaster.Vienna Convention for the Protection of the Ozone Layer is a multilateral environmental agreement signed in 1985 that provided frameworks for international reductions in the production of chlorofluorocarbons due to their contribution to the destruction of the ozone layer and resulting increase in the threat of skin cancer. The threats associated with reduced ozone pushed the issue to the forefront of global climate issues and gained promotion through organizations such as the World Meteorological Organization and the United Nations.

Water scarcity is the lack of fresh water resources to meet water demand. Due to unequal water distribution (exacerbated by climate change), resulting in some very wet and some very dry geographic locations, plus a sharp rise in global freshwater demand in recent decades driven by industry, humanity is facing a water crisis.

Xerophyte is a species of plant that has adaptations to survive in an environment with little liquid water, such as a desert or an ice- or snow-covered region in the Alps or the Arctic. Popular examples of xerophytes are cacti, pineapple and some Gymnosperm plants.

Zero Waste is the conservation of all resources by means of responsible production, consumption, reuse, and recovery of all products, packaging, and materials, without burning them, and without discharges to land, water, or air that threaten the environment or human health. Inother words, it is a philosophy that encourages the redesign of resource life cycles so that all products are reused. Thanks toSnizhana Zhytnikovska for this word