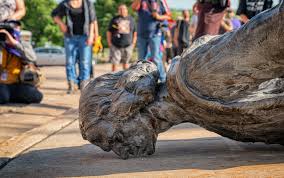 In the rise of Black Lives Matter (BLM) protests all over the globe, a great number of statues have been torn down or destroyed. From Edward Colston over Christopher Columbus to Winston Churchill, a wide range of historical figures have been targeted.

All of these actions are part of a so-called Cancel- or Exit Culture that deals with the boycott of controversial (in a racist, anti-Semitic or violent manner) individuals. One core question that is related to this culture is whether people should get a ‘positive’ way of attention by being placed in crowded spaces such as public squares. It also questions if the actions of the respective person are separable from the person itself, and if this distinction should matter in the first place. This certainly makes sense for artists or states(wo)men – but how do we deal with such circumstances when we are talking about intellectuals?

In case of doubt, intellectuals are not directly relatable to horrific deeds such as slave trading or even the killing of indigenous peoples in Africa or Asia. Nevertheless, it is definitely worth discussing if the rhetoric of people such as Adam Smith, who promoted free trade and cross-border supply chains, has somehow provided fertile ground for the slave trade. Either way, Adam Smith’s influence in theoretical economics was acknowledged with a statue in Edinburgh, Scotland. The fact that it has not yet been targeted by the BLM movement raises the question of where cancel culture begins and where it stops.

From my perspective, it is quite indisputable that writings such as “The Wealth of Nations” paved the way for a capitalist ideology that made slave trade and imperialism possible in the first place. But could he be taken accountable for that? At a first glance, this seems far-fetched. Smith could have never known that his ideas ultimately led to an interconnected economic world that some people misused for slavery and comparable brutalities. But the way we deal with Marx or Engels shows that it is not easy to separate ideology from what followed afterwards.

To be frank, I don’t think that taking down the image of a controversial person is solving problems, and rather has negative effects on discussion culture – especially because it cannot undo what has happened. This holds for states(wo)men as well as intellectuals. In Germany, for example, it is an important part of school education to discuss World War II with all its cruelties in order to prevent such things from happening again. For many of us, it is an integral part of our youth to visit concentration camps to get closer to what our ancestors have done in our country over 70 years ago. Auschwitz, for example, serves as a monument and place of remembrance. Although some parts of it have been reconstructed, it gives an idea of the cruel machinery of the Third Reich. It is obviously not possible to compare statues with places like Auschwitz. And it is even trickier to create such a kind of commemorative culture for the slave trade. But already existing statues pose the unique possibility to be used as a place of constructive debate on controversial figures. This is also the reason why I think that putting these statues into museums does not have the same effect. The public presentation with a historical classification in the form of plaques or similar installations forces a very different kind of confrontation with history than consciously paying for a museum visit. Not just because it is more visible but because those who should be targeted with these ‘monuments’ won’t critically go into a museum anyway.

Apart from all of that, I believe that it is simply wrong to reduce a historical figure to certain sayings or actions without putting them into historical context. By no means, any putting in context could justify the killing or torture of people. However, dealing with these personalities might pose the rare opportunity to dive into the circumstances of past centuries – this is true for artists or states(wo)men as well as for intellectuals. Because in the end, a thoughtless destruction of statues or the boycott of personal legacies obstructs the way towards a constructive dialogue and critical engagement.

Racism does not disappear because the image of a racist disappears. Racism is a structural problem that is too complex to be combated by the simple destruction of the respective symbols. The greatest ideas of our time and most of social progress arose from debate and discussion. The division of labor as one of the greatest ideas in economics and the origin of prosperity does certainly not outweigh the misery that has been caused through the slave trade. But it reminds us of the consequences of a global economy that has never been more connected than today. Although we luckily overcame slavery, there are other economic challenges ahead of us. We should be prepared and focus on what is most important: reevaluating rules that were valid in the past and figuring out what we want our future to look like. Because the past cannot be undone. But we can shape our future. With everything that has happened in mind: it can only get better.