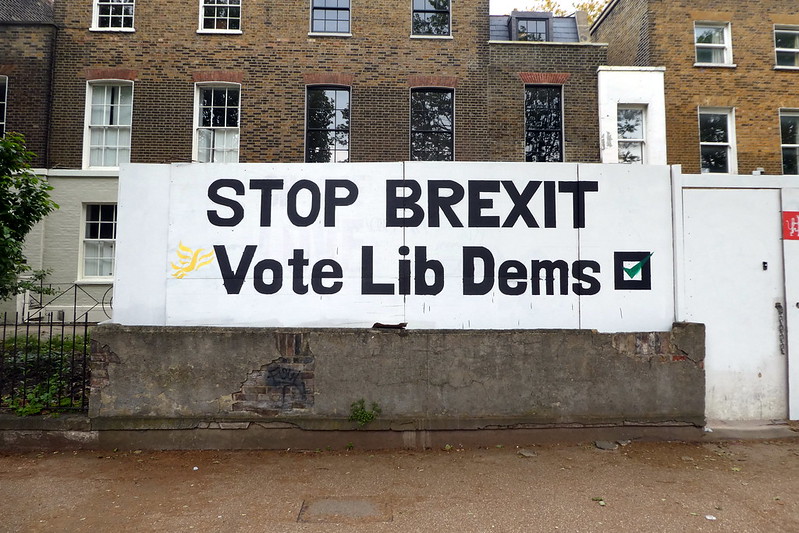 By "duncan c" on flickr.com

It’s the Brexit deadline that wasn’t, then almost was, but then again wasn’t. Britain’s ‘do or die’ Halloween exit from the EU ended up being nothing more than unfulfillable hyperbole. Warnings that Britain would “explode” if the Halloween deadline was missed have come to nothing. In fact, as I write this, I understand that the most ‘explosive’ thing to have happened since Halloween is that a strong storm passed over Southern England. But, whilst Boris Johnson was unable to take the UK out of the EU on time, he has managed to strike a new Brexit deal. This deal has thoroughly angered Northern Irish Unionists, as it will involve border controls between Northern Ireland and mainland Britain as well as separate customs arrangements for Northern Ireland.

Johnson was, unlike Theresa May, able to get his bill through its first stage in Parliament, on a relatively healthy majority of thirty. But, as we have so often seen in this process, defeat was snatched from the jaws of victory, as MPs voted to reject Johnson’s breakneck timetable for ramming his deal through the Commons.

This led Boris Johnson to finally win Parliamentary backing for his next move: a general election. That’s right! Come 12th December, the electorate of the United Kingdom will head back to the polls for a nationwide vote for the fifth time in four years. But, this time, it is an electorate that is well and truly battle-weary. Since 2015, the national conversation in the UK has centred on nothing other than Brexit. For three-and-a-half years, the UK has been attempting to leave the EU. For two-and-a-half of those years, we have had the abject chaos that the hung parliament of 2017 unleashed. All of this has created an electorate, and a political landscape, that is bitterly fractured and divided.

The Conservatives and Labour both haemorrhaged voters in the European elections back in May. They will be desperately trying to avoid the same thing happening again come December. This time, Johnson will be pitting the people against a ‘Remain’ parliament; thus, creating new, and perhaps unexpected, battlegrounds. These new battlegrounds that will be fought over are complicated, but I will do my best to summarise.

Many safe Labour seats in the party’s heartlands in Northern England, the Midlands and Wales voted to leave the EU in 2016. In the 2017 election, Conservative inroads in these areas were few and far between. Since then, polling has come to suggest that people across the country, myself included, are sick of Brexit. Promises of ‘just getting it done’ may well resonate here. However, there are many people in these Labour heartlands who are ideologically-opposed to the Conservatives. This is where the fledgling Brexit Party comes into play.

Having swept the European elections, winning twenty-nine seats and becoming the single largest party in the European Parliament, Nigel Farage’s new party poses a threat to both the Conservatives and Labour. In Labour heartlands, the Brexit Party may well split the vote, as ‘Leavers’ who can’t bring themselves to vote for the Conservatives, but who still want to move away from Labour, lend their vote in order to ‘get Brexit done’. In Conservative heartlands in Southern England, much of which is also comfortably ‘Leave’, the Brexit Party could also split the vote, due to the Conservatives’ inability to get Brexit over the line.

But there are also problems for both main parties elsewhere in England and in Scotland. In Scotland, the SNP (Scottish National Party) poses a major threat to Labour. No Labour government has ever won an election without winning a majority of Scottish seats. However, since 2015, the SNP has been the predominant political party in Scotland, and current polling suggests that this will remain the case. If Labour doesn’t do well in Scotland, it is difficult to see where the seats required to form a government would come from.

Similarly for Labour, they would have to hold all of their current seats – some with majorities as tight as twenty -, beat the SNP in Scotland and flip Conservative-held seats in urban areas, such as London and Birmingham. They would also have to avoid a vote-split with the Brexit Party. In 2017, Labour’s unclear Brexit policy made it possible for both ‘Remain’ and ‘Leave’ voters to back them. Now, the party has committed to another referendum, something that could prove unpopular with such a weary electorate, particularly in more ‘Leave’-leaning areas.

So, dear reader, are you confused yet? If so, you are not alone. Truthfully, at the time of writing, even psephologists are uncertain of what will happen. Pundits and parties alike are warning the public to take little heed of opinion polls, as the electorate is so fractured that vote splits and minute majorities are a near-certainty. But these are febrile times, and Election Day is still weeks away. In the 2017 general election, the Conservatives initially looked unassailable, but ended up losing their majority. In the English local elections back in May, it looked as though Labour would make substantial gains at the expense of the Conservatives, but both parties ultimately lost seats and councils.

Whatever happens on 12th December, either the Conservatives or Labour will, come what may, form the next government – either as a majority, minority or in coalition. The Conservatives will see this as vindication of their Brexit policy, and will likely take the UK out of the EU within weeks of forming a government. Labour will likely use this to action their muddled Brexit policy and herald in the most comprehensive, and controversial, set of social and economic reforms since Thatcherism.

With this in mind, whoever wins on 12th December, I can’t help but feel that it will be Britain that will lose.