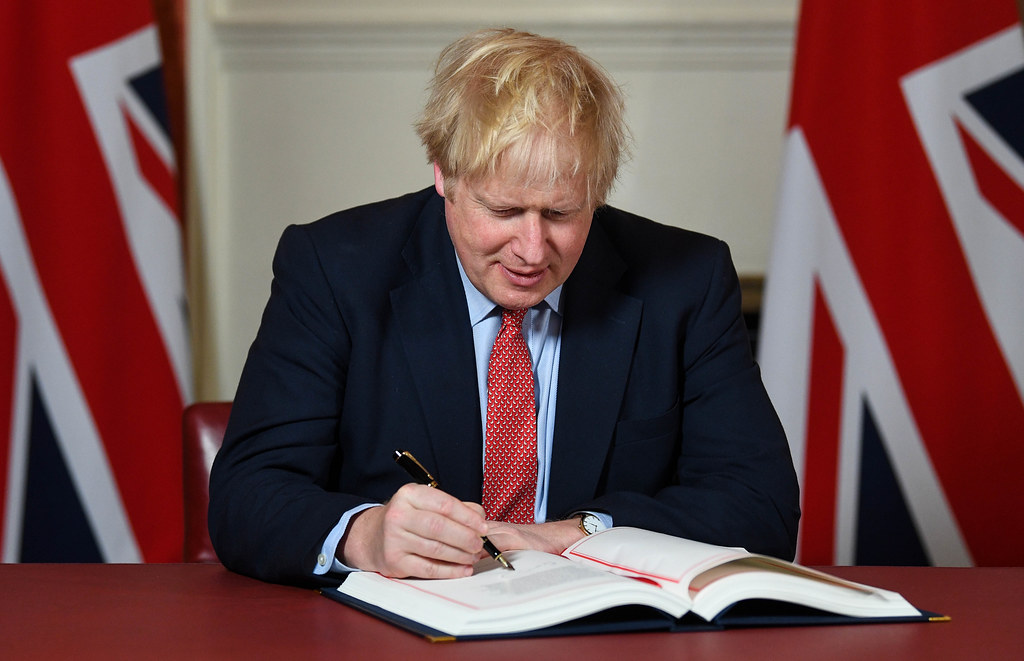 After years of debate, negotiations and impasse, Britain will leave the EU this Friday, the 31st January 2020. This will be the final Brupdate before Brexit Day.

In Britain, a strange calm seems to have descended since December’s general election. The debate over whether or not Brexit would actually even occur has been ended. With his huge majority, Boris Johnson was able to pass his Withdrawal Agreement with ease in only a matter of days, with little scrutiny and with no opposition amendments forced upon it. Theresa May could only ever have dreamt of such a quick and smooth passage of a government bill. So decisive was the election result that even the House of Lords, an intractable bastion of opposition during the last parliament, has backed down. The Withdrawal Agreement passed with ease and has received Royal Assent. Brexit is now legally obligated to happen. But while, on the outside, things may seem calm – but they are anything but. Domestically, the Labour Party is caught up in in-fighting as it picks its new leader. Will it opt for the ‘Continuity Corbyn’ candidate or will the party choose a new, more centrist direction? Internationally, Donald Trump’s aggression towards Iran and his violation of Iraq’s territorial sovereignty is causing as many problems for Boris Johnson as Trump’s fast-and-loose Twitter diplomacy did for Theresa May. Johnson not only needs to keep Trump and the United States on-side in order to secure that prized US-UK trade deal, but he also needs to keep the EU on side in order to even attempt to secure a post-Brexit EU trade agreement by the year’s end – something which he has bound himself to do through legislation.

Iran and trade deals aside, Johnson and the Conservatives are keeping a close eye on the Labour leadership contest. The next general election is scheduled to take place on 2nd May 2024. Whoever Labour chooses as its new leader will spend roughly four years as leader of the opposition. This could make or break the party. Enter: the current candidates – Rebecca Long-Bailey, Keir Starmer, Emily Thornberry and Lisa Nandy. The woman who was seen as Corbyn’s natural successor, Laura Pidcock, lost her seat in the December election. Now, Rebecca Long-Bailey, a member of the Shadow Cabinet and a staunch Corbyn ally, has become the ‘continuity’ candidate. However, the limited polling that has so far been conducted gives Keir Starmer – the driving force behind Labour’s electorally-disastrous Brexit policy – a healthy lead. But put your ear to the ground and you will hear a very different tone from the Conservatives. For them, Rebecca Long-Bailey would be the ideal Labour leader, as she is unlikely to win back voters who swung to the Conservatives back in December. Thornberry and Nandy are also seen as largely inconsequential to the Conservatives’ fortunes. Starmer, they widely believe, would certainly reduce their majority of eighty at the next election, but is unlikely to take Labour back into government. Some Conservatives see him as being a ’new Neil Kinnock’ – the man who led Labour out of the darkness following their 1983 electoral wipe-out, before making way for Tony Blair, the man who took Labour back into power.

If the whisperings on Conservative thought are correct, then Labour can expect to remain firmly stuck on the opposition benches after 2024. But Johnson ought also to keep an even closer eye on the Middle East. For, in the world of post-Brexit trade deals, all roads have come to lead through Iran.

On 31st December 2020, the UK’s post-Brexit transition period (in which it is, essentially, a non-voting member) will end. Between late-February and the early autumn, the UK must strike a basic free trade agreement with the EU and a far more comprehensive, wide-reaching one with the United States. This is already an enormous task. But, since the new year, it has been made even more complicated by the sudden and severe escalation in tensions between the US and its Middle Eastern allies on one side and Iran on the other. On 3rd January, the US killed Iran’s senior military commander and strategist General Qasem Soleimani in a drone strike near Baghdad Airport. The attack enraged both Iran and Iraq. Iran soon responded by launching coordinated missile strikes on US military bases in Iraq, accidentally shooting down a Ukrainian passenger jet in the process, killing 176 people – among them, four Britons. In response to the shootdown, anti-government protests have broken out across Iran. In the midst of this chaos, the UK is trying to walk a tightrope. Government officials – chiefly, Boris Johnson and Foreign Secretary Dominic Raab – have made a series of indecisive statements which have softly condoned the American drone strike but not as ardently as would normally be expected between such close allies. After all, the US sees Iran as its arch-enemy, while the EU takes a much softer stance – and is still desperately trying to salvage the Iran-5+1 Nuclear Deal in the wake of the unilateral US withdrawal back in 2018 and the current increased tensions.

If Johnson’s government pushes the EU or, more importantly, the European Commission too far, then the new Commission President Ursula von de Leyen may well want to make the process more difficult for the UK during the short negotiation period. If Johnson’s government pushes the US too far, then Trump may well point-blankly refuse to negotiate a post-Brexit US-UK trade deal, as he has threatened to do in the past. If the UK is to ‘make Brexit a success’ in any way, shape or form, then it will need these two trade deals, as they will form the benchmarks against which other countries and customs blocs will set their own red lines and trade policies when negotiating with the UK.

Now that the question of whether or not Brexit will actually happen has been answered, both parliament and the British people will be looking to Boris Johnson and his Conservative Party to fulfil the promises made by the Vote Leave campaign during the Brexit referendum – in which Johnson was a prominent figure. This is where Iran and the Labour leadership contest meet. Rebecca Long-Bailey – or any of the other ‘inconsequential’ candidates – would likely struggle to continually and strenuously hold the government to account in a cohesive way. Long-Bailey has already ably demonstrated this through her praise of Corbyn’s disastrous leadership of the party, as have Lisa Nandy and Keir Starmer through their continued and ongoing praise of Labour’s muddled, contradictory Brexit policy. For Labour, there is no clear candidate for leader who can win back former voters, reassert the party in its former heartlands and win seats in places where Labour has not won since the first Blair years.

In December, Boris Johnson completely redrew the British political map. He took the gamble of a lifetime in calling that election as, at that time, polling suggested that a Conservative majority was far from certain. His gamble paid off. But, even with a majority of eighty behind him, on the world stage, Johnson still finds himself on a tightrope. One wrong move and he falls over one side, economically cleaving the UK away from either the EU or the US. That being said, domestically, the Conservatives are at their strongest since the heydays of Thatcherism.

2019 was a turbulent year for British politics, Boris Johnson and the two main parties. But the current quiet might well be deceptive. January 2020 could prove to be the calm before the storm.

Luke Sandford is Libel’s UK correspondent. He is from South-East England and extensively campaigned for a people’s vote on Brexit during his years studying for his undergraduate degree at Goldsmiths College, University of London. He now lives in Sweden where he studies European Studies at Lund University. His Swedish is middling; his journalistic skills are better.