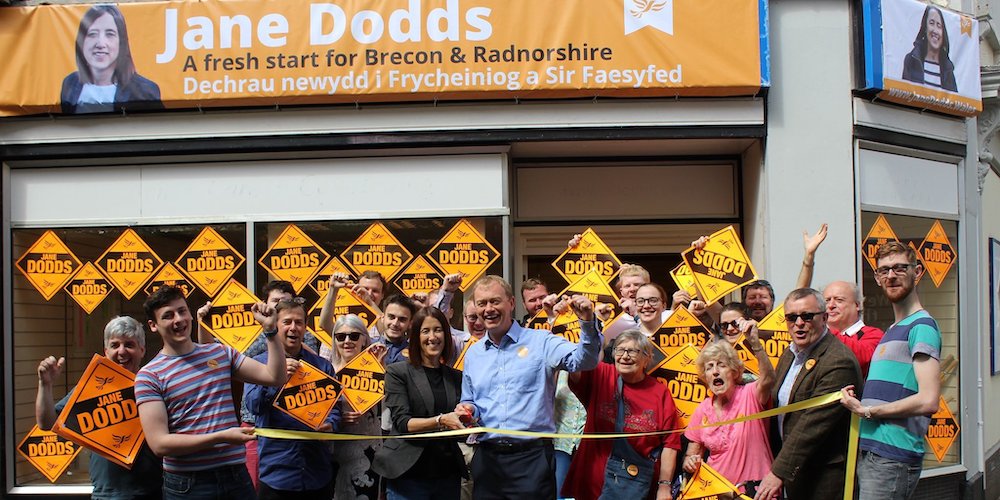 New member of parliament Jane Dodds (centre) at the opening of her campaign office.

It’s a wiser man than I who can predict just what on earth will happen next in British politics. Not so long ago, I wrote about what I believed a Boris Johnson premiership could do to/for Brexit. It wasn’t exactly committal, but there was one key thing which I didn’t factor in: a by-election.

The good people of Brecon & Radnorshire, Wales completely changed the political landscape on Thursday 1st August. The seat narrowly voted to leave the EU in 2016. Now, the people of Brecon & Radnorshire have unseated their Brexit-supporting Conservative MP in favour of an unequivocally pro-EU MP. The result has, potentially, put Britain on course for a divisive snap election.

In 2015, David Cameron won a Commons majority for the Conservatives; in 2017, Theresa May lost that majority. Ever since, chaos has ensued. Despite clinging on to power through a confidence-and-supply agreement with the Democratic Unionist Party (DUP), May suffered defeat after defeat throughout the following two years of her premiership. By her government’s twilight days, defeats, leaks, defections and rebellions had become the norm. Less than a fortnight ago, Boris Johnson inherited May’s tiny working majority. After the Brecon & Radnorshire by-election, that majority has been reduced further to just one. In simple numbers, the government (Conservatives and the DUP) have 320 seats; the opposition parties have 319. The Conservatives are deeply split over Brexit, chiefly, how/if to leave the EU. Labour, the main opposition party, is also split – albeit less cataclysmically – over Brexit. Rebellions, on both sides of the aisle, and governmental defeats seem almost certain; because, as has been demonstrated, there simply aren’t enough Labour rebels to offset the various Conservative cliques’ rebellions.

In the words of Scottish First Minister Nicola Sturgeon, Boris Johnson has clearly set the UK on a path towards a no-deal Brexit. If Parliament refuses to grant him this, going back to the people in the form of a general election, with a clear manifesto commitment to a no-deal Brexit, may become his only option. But it would truly be a last resort. Current polling suggests that the popular vote would be roughly evenly split between the Conservatives, Labour, the Liberal Democrats and the Brexit Party. In other words, another hung Parliament is very likely. Potentially, one without a clear pathway to forming a majority government.

However, as with the EU referendum, polling can be wrong. The Conservatives are currently the largest party, and could win a majority again, or at least stay roughly where they are and work with other parties, as they do now.

One thing I can say with certainty, any general election campaign at this time and in this climate would be brutal. The EU referendum campaign split the country down the middle. Further votes and actions by politicians in the three years since the vote have only served to deepen those divisions. Any general election campaign would probably be fought along the lines of no-deal vs. Remain and Reform – two binary choices at polar opposite ends of the Brexit question.

With any election outcome so uncertain, an election realistically only complicates things further. Particularly, as the UK uses the First-Past-The-Post voting system, where the distribution of votes is far important than the total number of votes; thus, meaning that, at no time in post-WW2 Britain, has any British government been elected by a majority of the electorate.

Britons are so deeply divided that it’s almost impossible to think of a way to bring them back together, if it can be done at all. But one last thing I can say with certainty: a general election with tactical voting, divisive rhetoric and binary choices would turn these deep divisions into uncrossable chasms.