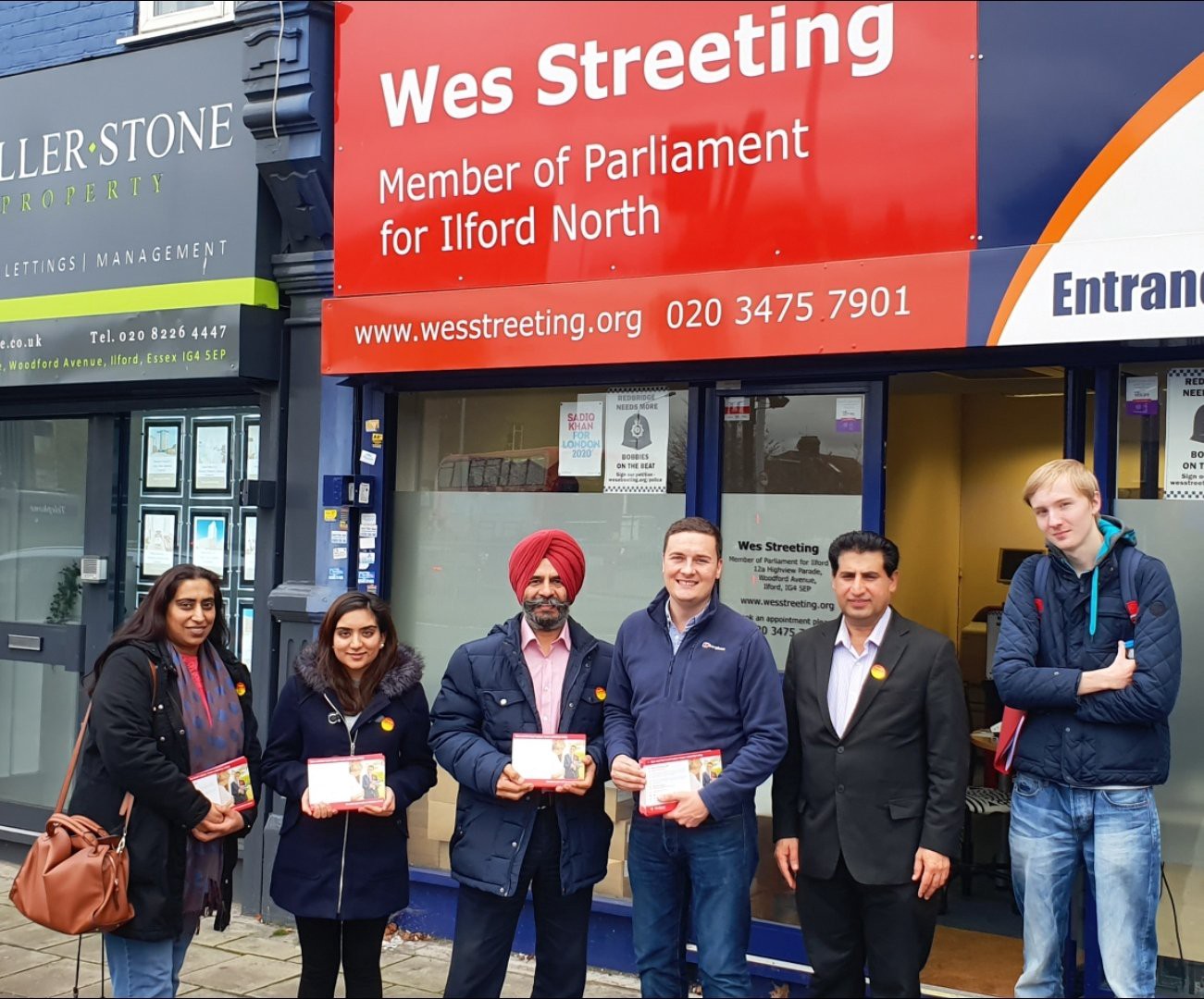 Labour MP Wes Streeting (3rd from the right) in front of his constituency office.

The UK’s general election is drawing ever closer. Yet still – mere days away from polling day – no one seems to be able to predict what will happen with any real certainty. This is due to the fact that UK uses the First-Past-The-Post voting system to elect 650 MPs to its 650 constituencies. FPTP is a local voting system rather than a national one. This means that, in effect, 650 local elections will take place across the UK on Thursday 12th December; whichever party wins the most local elections wins the general election overall – and, in all likelihood, a parliamentary majority in the House of Commons.

The probability of a Boris Johnson-led Conservative majority does seem to be on the rise, but this is an outcome that is still far from certain. A handful of tight marginal seats (seats where it is uncertain who will win – in most of the seats the majority for one party is so big, that the result is usually clear form the outset) could ultimately swing this election either way. One such marginal is Ilford North in London, held by Labour’s Wes Streeting. In the 2015 general election, Streeting bucked the national trend when he gained the seat from the Conservatives on a slender majority of 589. In the 2017 election, this rose to 9,639. This may seem like a rather safe majority, but an estimated 53% of voters in Ilford North voted to leave the EU back in 2016 – slightly higher than the national result. Meanwhile, Wes Streeting is an outspoken Remain supporter, who has campaigned for the public to have a final say on Brexit. With all this in mind, I spoke to a grassroots Labour campaigner in Ilford North to get his thoughts on the election, the major parties’ campaigns and his view on the likely outcome of the election.

Phillip (not his real name) joined Young Labour (the party’s youth wing) in his late teens. Now in his early twenties, he is currently campaigning in his third general election. Phillip first became involved with campaigning in the 2015 election, when he was a part of the team who swung Ilford North to Labour.

Streeting was expected to lose Ilford North two years ago, but, as Phillip puts it, “you wouldn’t believe how many people were against the Conservatives in 2017, having voted for them just two years before”. Back then, Labour leader Jeremy Corbyn was commonly seen as being new, fresh and untested. Today, the strong national dislike of Corbyn appears to be seeping through. “This election will be won by the man who’s hated the least: Boris Johnson or Jeremy Corbyn. It could mean marginal seats [in the Midlands and Northern England] like Wakefield and Bishop Auckland changing hands.” But there are other factors beyond general dislike in play.

On 11th November, Brexit Party leader Nigel Farage announced that his party would stand down its candidates in the 317 seats that the Conservatives won in 2017 in order to avoid splitting the ‘Leave’ vote (i.e. the votes of those who voted to leave the EU in the Brexit referendum). Days before that, the Liberal Democrats, Greens and Plaid Cymru (the Welsh nationalist party) had announced that they would form Unite to Remain, an alliance that will see the parties working together in dozens of seats across England and Wales in order to avoid splitting the ‘Remain’ vote in certain marginal areas. But Labour is actively avoiding this pact. Why? Ask five Labour politicians, you’ll be told five different answers. Phillip had some choice words about this refusal: “It makes no sense to go against a candidate who believes in remaining. [For example, in London,] why are the Liberal Democrats standing in Chipping Barnet, and why is Labour standing in Finchley and Golders Green?”

He believes that Luciana Berger, a Jewish MP who quit the Labour Party over anti-Semitism and is now a Liberal Democrat candidate, deserves to win in Finchley and Golders Green, but that the expectation that Labour will win there “will take [that] victory from her”. But, ultimately, Phillip isn’t wholeheartedly supportive of tactical voting. “I wish people feel they can one day vote for who they like, rather than against who they don’t like.”

Parties across the political spectrum have attempted to paint the Brexit Party’s unilateral pull-out and the Unite to Remain pact as being something other than tactical. Yet, that is precisely what these moves are, they are a form of tactical candidacy designed to prevent vote-splits.

But Phillip doesn’t believe that tactical voting for any party will make a real difference to Labour or the Conservatives’ fortunes in this election. “The choice in Ilford North remains the same: an independent-minded MP with Wes Streeting, or a Boris Johnson yes-man.”

Phillip may well be right. Tactical voting may have very little tangible impact when all is said and done. But voters’ dislike of the two main leaders may well have an impact. Both men are seen as untrustworthy, bigoted and unlikely to tell the truth, or as indecisive, a majority of the British public. Trust is a particularly pressing issue for Boris Johnson, just as bigotry is for Jeremy Corbyn. This was hammered home to Britain on 26th November, when, in an unprecedented move, the Chief Rabbi of Britain Ephraim Mervis and the Hindu Council UK asked voters not to vote for the Labour Party. For the Chief Rabbi, it was due to the scale of anti-Semitism within Labour’s ranks – instances of which have been coming to the fore for more than three years, but that the party has still not resolved. For the Hindu Council UK, it was due to anti-Hindu prejudice stemming from Labour’s hard-line stance on the Indian government’s actions in Kashmir.

That same day, the Muslim Council of Britain issued its own statement. In it, it asked voters not to back the Conservatives due to the widespread Islamophobia within the party and Boris Johnson’s own comments which compared the traditional dress of Muslim women to “letter boxes” and “bank robbers”. Journalists across the country have been trying to find precedent for such interventions; there simply isn’t one. There is no precedent for representatives of three of the UK’s largest religions asking people to vote a certain way.

As Phillip says of Labour: “The party’s done next to nothing about antisemitism … no apology, no remorse, no leadership. There are, frankly, no excuses anymore.” During his canvassing sessions, he’s found that Labour’s issues with anti-Semitism have bled through to even the most politically-unconscious of voters. To Phillip, it probably means that “good, mainstream Labour candidates will be sacrificed on Jeremy Corbyn’s altar of racism”.

But, in Ilford North, at least, there is another major factor in play in this election: the Conservative Party leadership. In 2017, Theresa May’s election campaign was dreadful from the outset. Through her U-turn over the “Dementia Tax”, her inability to give straight answers to reporters’ questions and her response to terror attacks in Manchester and London during the campaign, May succeeded in throwing away, not only her huge polling leads, but her majority with it.

Johnson has a reputation of being a strong campaigner, earned through his eight years served as Mayor of London. But he hasn’t been as active on the campaign trail this time, having come under fire from members of the public, while his performance on the Question Time Leaders Debate was, at best, mixed. But, despite him not being a constant presence this time around, the Conservative campaign slogan of Get Brexit Done is resonating with voters in ‘Leave’-leaning marginal seats.

Despite this resonance, Phillip is still confident that this messaging can be overcome. “It is possible because [the Conservatives] have tried this Coalition of Chaos under Labour line 3 times now. What the people really know is that they’ve had a Coalition of Chaos in chargefor nearly a decade. The troubles of today have been caused by a Conservative party that has treated politics as a game and played fast and loose with this country’s future.”

Despite his optimism on campaign messaging, Phillip is firm on what he believes the election result will be. “I’d be happy with a hung parliament”, a caveat before he adds, “I think there will be a Conservative majority – but not a large one.” His frustration is clear, not just at the likelihood of that prospect, but at the failure of the main party leaders to learn the main lesson of the 2017 election: “the choice in 2017 was between a hard-Brexit Conservative party and a hard-left Labour party, and the people turned around and said ‘well, we don’t want either of you’”. Phillip might well be right. Neither of the main parties won a majority, nor were they able to build a coalition, with the Conservatives ultimately coming to rely on a far looser confidence-and-supply agreement with the DUP (Democratic Unionist Party). Despite this verdict, by and large, the same type of Brexit, the same types of social, defence and economic policies and the same soundbites are still being used, and both of the main parties are being led by faces known to the British people.

On December 13th, the Conservatives might well be forming their second majority government this decade. Yet, overall, to use one of Theresa May’s more infamous sayings: “nothing has changed”.