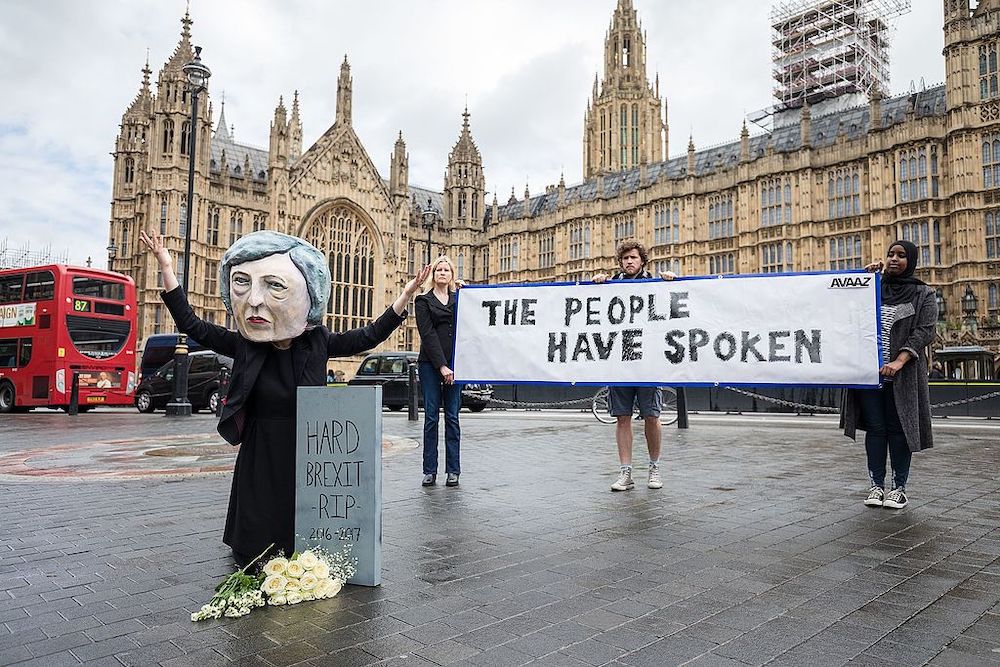 At the moment, Brexit is as confusing as this protest.

Brexit is being consumed by its own clichés. Freedom of Movement must end! cries Theresa May. Yet the Brexit-Ultras are outraged that doing so is reciprocal. We want control of our own laws and money! cries Theresa May. Yet some arch-Brexiteers are furious about losing our decision-making powers. We must leave on 29th March 2019, come what may! cries Theresa May. Yet even some of Brexit’s cheerleaders are now admitting that the UK cannot possibly be ready by that date – with or without a bilateral deal. The post-Brexit Immigration Bill is heading for defeat and the Trade Bill has now been withdrawn from the parliamentary agenda, despite their necessity and urgency. Parliament is paralysed, its various key figures and movers playing their fiddles as Britain burns – dramatic but apt. (If you want to re-live the entire saga of how we ended up in paralysis, you can do so here).

One could pen an entire novel about all that could happen next. But I will simply set out what is, in my eyes, the most likely outcome based upon where the UK is at the time of writing.

The ever-resilient Theresa May recently suffered the worst defeat for a government in British history. There are 650 MPs in the House of Commons, with 317 of them being Conservatives. Just 202 voted in favour of Mrs May’s deal. The margin of defeat was higher than the number who voted for it. The word ‘crushing’ is an understatement. The UK had little idea of what it was doing before this defeat; now we’re back at square one. Essentially, Mrs May is left with three options: move towards arrangements akin to being in the EEA (something which is openly opposed by EEA-member Norway) – known as Soft Brexit, leave without a deal – known as No-Deal/Hard Brexit/WTO Brexit, or hold a second referendum.

The first two options would most likely tear her party apart – perhaps permanently. The latter would tear Parliament apart, with MPs from the Conservatives and Labour ignoring their party whips to either prevent or force another vote. Some see it as an afront to democracy. Others see it as essential. Currently, May doesn’t back one, neither does opposition leader Jeremy Corbyn. In much the same way, May didn’t back a snap election in 2017. That U-turn ended rather badly for her and seems to have somewhat cemented her leopard print heels to the proverbial floor.

But, back to the paralysis.

May could hold a free vote on the more controversial aspects of her deal (such as the backstop). But I think this would achieve nothing. There is currently no majority for any workable, realistic kind of Brexit, let alone May’s deal. Soon, panic will creep in as MPs, particularly Remain MPs in Leave constituencies, start to realise that they will likely be blamed when the good ship Brexit slams headlong into the iceberg. Those on the opposition benches who are currently openly, strongly opposed (such as Shadow Education Secretary Angela Rayner), might begin to feel a little doubt seep in. Can they really afford to be seen to be complacent? Will they be blamed? Can their majorities survive doubts such as these? In short: probably, probably, unlikely. Extending Article 50 without any clear purpose would likely be unacceptable to many of their constituents. So, what’s next? There is no wholly attractive nor easy option. Brexit has forced difficult choices on many MPs throughout its short but problematic life. But now we’re at the pinnacle.

Assuming that the Conservatives haven’t entirely imploded by roughly early March (a bold assumption on my part) and that Corbyn has finally edged himself off the fence one way or the other (an even bolder assumption), then the Brexit paralysis will be rapidly snowballing into a near-terminal state. By then, almost four months will have elapsed since May’s Brexit deal was completed. It will have been around seven or eight weeks since that deal was resoundingly rejected. The time until Britain could possibly be engulfed in its greatest peacetime crisis will be counted in days rather than weeks and months. There is no way that I, or anyone else that I know of, could see the paralysis having been broken by then.

There is a real fear among the non-certifiable ranks of the British government that May is simply running down the clock until 29th March in hopes of frightening MPs into backing her deal. I believe they’re right. May knows that she cannot get a deal through the Commons with a backstop but that there cannot be a deal without one. It’s one circle that simply won’t be squared.

Backbench heavyweights such as Phillip Lee and Vicky Foxcroft have publicly made positive noises over a second referendum in the past but are now actively making moves to support one. I have it on good authority that MPs on both sides of the debate and on both sides of the house are now getting behind them in small but not inconsequential numbers. I could go on and on about the numbers required for another vote and how this could be put together, but that would be naval gazing.

I believe that Parliament, the EU and a plurality of the British public will back an Article 50 extension in order to hold another referendum. I believe that it’s the only foreseeable way forward. But it is dangerous.

Huge swathes of the country voted Leave because they felt ignored. Another referendum will likely make them feel snubbed and angry – a dangerous combination. But there was no clear consensus on what a Leave vote would look like before the 2016 referendum. We have a form of Brexit that Parliament has overwhelmingly rejected and that the British people seem to loathe (i.e. May’s deal) and a fantasy that Britain can be in ‘a’ customs union, have single market access, a say over the rules but yet negate all membership responsibilities (Corbyn’s unicorn Brexit).

But still, one must ask difficult questions. What should and shouldn’t be on any potential ballot paper? What happens if Leave wins again? What happens if Remain scrapes over the line? If Remain wins, what happens to the rage that the first referendum unleashed? Voting aside: how can we solve the social issues that led to Brexit?

So, much like one gigantic, erratic merry-go-round, this article is back to where it started: what happens next – even if another vote is in the frame? That is the paradox of Brexit: not knowing has become the norm. I’ve laid out my own beliefs as to what will happen next but I am hardly an expert on the matter – and even they’re stumped. However, there now does feel like true stalemate for the first time. Despite the time constraints, no one knows who or what will break the deadlock – even for another vote – or how they will find the numbers to do it.

There are no easy or clear answers to a simple question – Leave or Remain – with such colossal implications. There never has been; there never will be. It’s time that Theresa May, Jeremy Corbyn and the House of Commons stopped pretending that there are and started trying to find consensus for something, anything. Even if that means putting that same simple question back to the people.