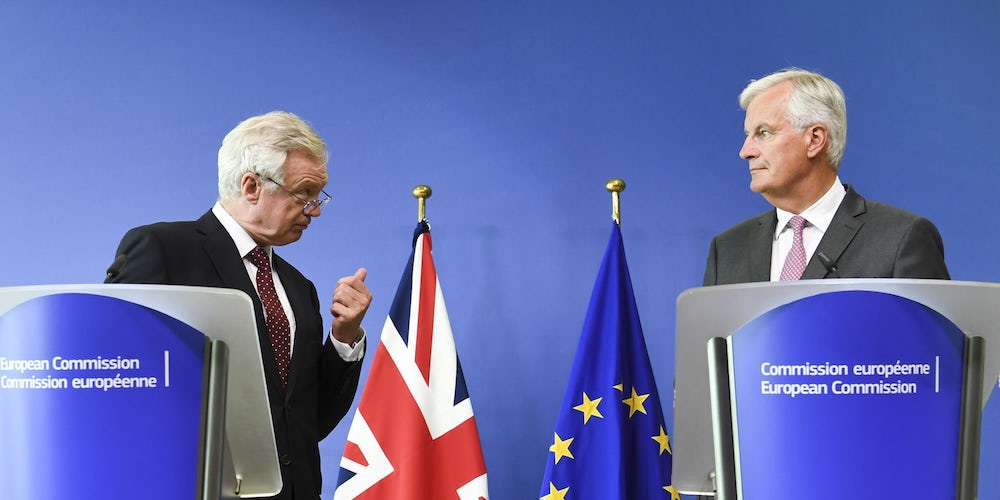 The difficulty of the Brexit negotiations arises mainly from misunderstandings on both sides. However, with the UK becoming significantly more realistic, the possibility of no deal is no longer at stake.

Recently, the Brexit negotiations have seen major progress. The UK government is rapidly conceding on many points, such as extending any special status given to those who arrived before Brexit to those who arrive during the transition period. The negotiations are going so well that some observers have suggested to ‘wrap up’ early. Things were not always that great, however. Up until December, a no deal scenario seemed to be on the table. Given the uneasy start, it is time to look back and see where exactly the UK and EU went wrong. In this article, I will argue that there are some major misunderstandings on both sides which complicated matters. With both sides displaying more flexibility, those misunderstandings have become less of an issue.

There are three main misunderstandings on behalf of the UK government.

Firstly, the UK does not understand why the EU is so inflexible on crucial issues such as the four freedoms. The UK has always seen the EU as an economic project. Because the British do not see themselves as truly European, due to their imperial history and lack of a land link with continental Europe, the EU is all about economic gains for them. Thus, they do not understand why the EU pushes ‘idealistic’ goals such as the freedom of movement.

Secondly, the UK’s political culture is very different from that of continental Europe. The UK uses the Westminster model, a parliamentary system where, normally, one party forms the government. This leads to a one party, no-compromises system of governance. Also, it encourages a boisterous political culture, as it is always all against one (the governing) party. However, for the EU negotiations, this has proven impractical. British politicians have been boisterous about their demands for the negotiations. Cabinet members, for example, have drawn multiple ‘red lines’ for the negotiations, such as no more ECJ interference after Brexit. In UK politics, this is standard procedure. In the EU, however, it has caused confusion, as continental politicians are used to a calmer, consensus-based system.

Thirdly, the UK assumes that the negotiations are amongst equals, with the EU having to make concessions as well, due to the economic damage imposed by a no deal scenario on European countries. After all, the EU is a net exporter to the UK and the UK is a major market for many companies. 20% of all German car exports, for example, go to the UK. Also, possibly due to the UK’s history as a global power and major player in the UN and global affairs, it may be hard for it to accept a subordinate role. This is not something that British politicians or the British public may be used to. This may explain why the UK has shown great reluctance to treat Brexit as a ‘litigation process’ with fixed terms dictated by the EU, rather than as a flexible negotiation.

However, there are also two main misunderstandings from the EU.

The first and major mistake is that the EU dramatically overstates the willingness of the British people to reverse Brexit. Yes, there is a small group of ‘hard’ Remainers who wish to reverse Brexit. This group, however, comprises only 22% of the electorate. All other groups support a Brexit of some sort. While only a small fraction of Remainers wants to reverse the Brexit vote, hardly any Brexiters/Leavers have changed their mind. According to a recent YouGov survey, only 3% of all Leavers have switched to remain. The consensus is to get on with Brexit and to not cause even more uncertainty by reversing it. Yes, there are three parties backing a Brexit reversal: The Liberal Democrats, the Greens and Sinn Fein. However, those parties are irrelevant: Together, they comprise 13 out of 650 seats in the House of Commons. Thus, comments from EU officials like Donald Tusk that the UK can stop Brexit at any point and decide to stay in the EU are largely ignored in the UK.

Secondly, there is unwillingness in the EU to understand why the British people voted for Brexit. The reasons for Brexit are manifold. The main ones are that the British deeply care about their sovereignty as an island nation, that they want to decrease immigration to maintain control of their borders and to preserve their identity, and that they want to rebuild their close relationships with the Commonwealth and the US. Nevertheless, most of my continental European friends believe that Brexit is outright stupid. When I listen to the comments by Barnier, Juncker and Tusk, I cannot help but get the impression that they think the same. This is a dramatic mistake. Ignoring the reasons for Brexit makes the EU unable to understand where the actual ‘red lines’ lie for the British electorate.

However, as previously mentioned, progress has been made.

On the one hand, the UK has adjusted its stance. Firstly, it has accepted that the EU does have a more principled approach to the four freedoms of the single market. After all, it has been told for one and a half years now that it cannot have its cake and eat it. Consequently, it has accepted the continuation of freedom of movement during the transition period. Secondly, the UK has accepted a superior negotiation position to that of the EU. This can be seen by Theresa May’s major concession on the Brexit bill as well as on the special status for those arriving during the transition period.

On the other hand, the EU has shown more flexibility. It has expressed interest in the British idea that the UK could collect customs duties on behalf of the EU. This would enable the UK to be outside the EU customs union and single market while avoiding a hard border involving customs checks in Northern Ireland. The EU also seems to have finally accepted that Brexit will happen and that a reversal is extremely unrealistic.

The emphasis here is on flexibility. As the narrative in the media of neither EU-countries nor the UK has fundamentally changed, it seems more likely that the flexibility is due to pragmatism, not compassion.

The progress does not mean everything is sorted. The Northern Irish border remains a contentious issue. The Republic of Ireland is threatening to veto any deal that involves a hard border. The details of the UK customs proposal to collect duties on behalf of the EU are also far from sorted.

As we have seen, there are major misconceptions of the other side in the negotiations. Nevertheless, both sides have found a way to sidestep those misunderstandings to push ahead with a deal, wich is in the economic interest of both the UK and the EU.