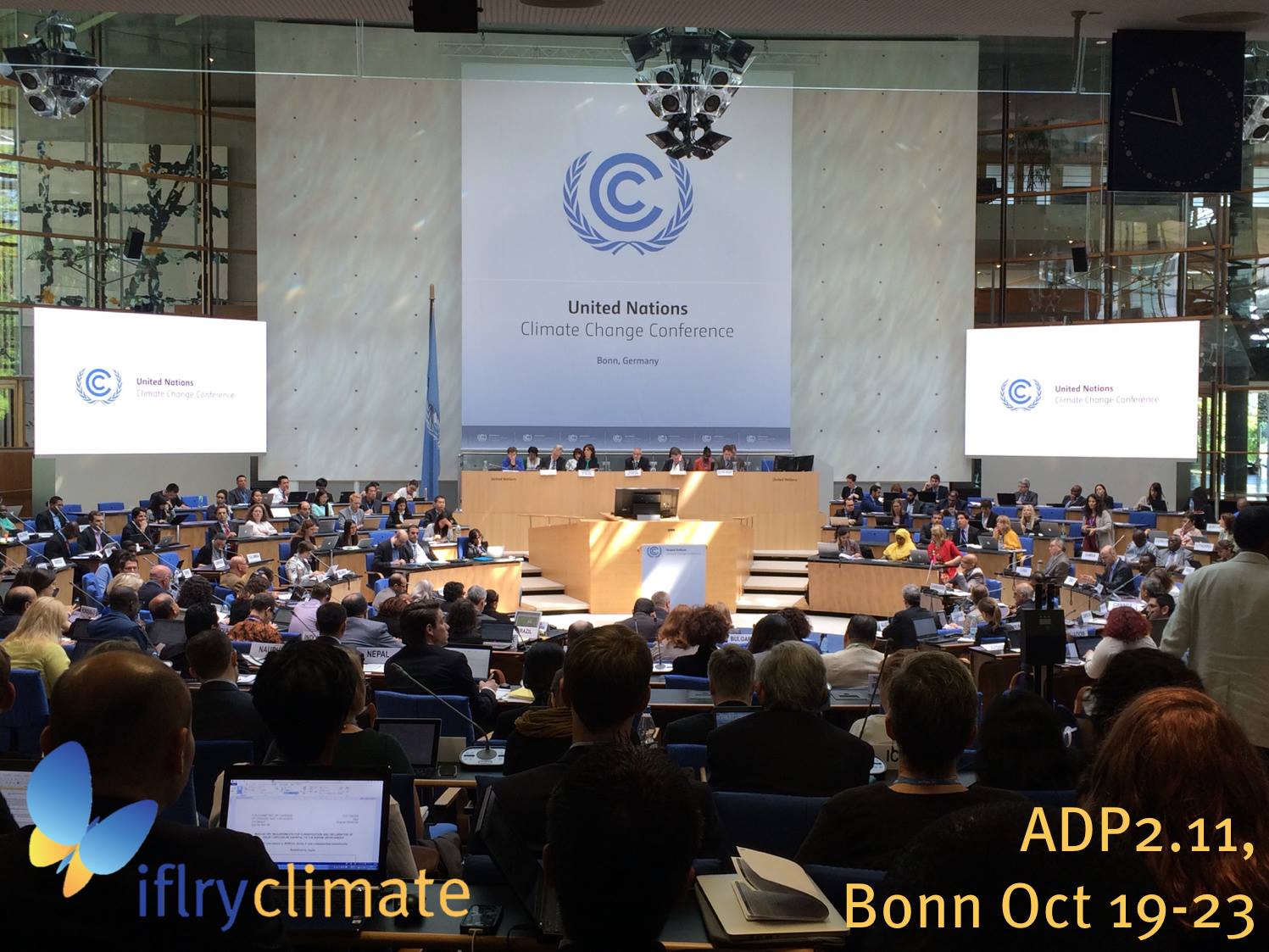 #COP21, where the crucial negotiation of an international climate change agreement will take place, is set to take place in Paris, France this December. This conference is of critical importance: in order to prevent and limit the catastrophic future consequences of climate change, the international community must commit to a large scale restructuring, in order to reduce global warming to a maximum of 2⁰C – the level at which climate change is considered manageable. The aim of COP21 is to reach an agreement to secure this.

Meetings have been taking place throughout 2015 in order to lay the groundwork for the success of COP21. The final meeting before the Paris conference was held in Bonn, Germany, from 19 to 23 October. The main discussion point was a 20-page proposal – a slimmed down version of the 90-page document which resulted from a previous conference, held in Geneva in February. Because the new proposal left out a lot of measures contained in the conclusion of the Geneva conference, the main interest of the different groups at the conference was trying to re-insert some of their plans that had been left out of the new proposal. The Bonn talks ended with a text of 55 pages, a longer text than the 20-page document the conference started with, but much shorter than the 90 page conclusion of the previous Geneva meeting.

A worrying development at the Bonn meeting, was that observers were banned from attending negotiations, sparking worries that this would be repeated in Paris. This decision was taken because a some parties felt the presence of observers inhibited frank discussion. However, the decision is controversial, not only because many countries were against it (notably the G77, which consists of 133 countries), but also because it defies article 4 of the UN Convention, which guarantees the participation of civil society. Given that the participation of observers is essential in order to hold countries accountable and to ensure that the agreement is as ambitious as possible, IFLRY believes all necessary action must be taken to ensure that observers are present again in Paris.

In terms of the content of the conclusion reached in Bonn, several disagreements remain which could pose significant barriers to the reaching of an ambitious and workable agreement in Paris.

A clear long-term goal is needed to set out what COP21 is intended to be a step towards. This must be as strong and as ambitious as possible, as it will define what future we aim towards. Many elements of this remain unclear. For example, it is necessary to distinguish whether the long term aim is zero emissions, or net-zero emissions. Net-zero allows for some emissions as long as there are ‘carbon sinks’, such as CCS (Carbon Capture and Storage) or forests, that are sufficient to prevent emissions from entering the atmosphere.

It is necessary that climate finance continues to increase. Therefore, any agreement should make reference to a planned ‘scale-up’ of climate finance. This is partly to help build trust between developing and developed countries, but it is also crucial in order to ensure that there will actually be enough finance for the challenges we will have to tackle. Key parties – notably the U.S. – currently oppose ‘scale-up’. Another important way to build trust among the parties, is to not remove the article on loss and damage. Currently, some parties are in fact wanting to remove the article from the agreement. We want, and believe we need, a reference to loss and damage in the agreement text. IFLRY have members and member organizations in countries and regions already affected by climate change.

The negative effects of climate change are disproportionately borne by people and communities already in disadvantageous situations due to their geography, poverty, gender, age, disability, and cultural or ethnic background (among other factors). Typically, these are groups that have contributed the least to greenhouse gas emissions, and are those that often struggle to find a voice in climate change negotiations. It is essential that specific concerns related to, for example, gender, indigenous rights and intergenerational equity are taken into account in the COP21 agreement, and IFLRY Climate Change programme makes this a priority.

Developed countries are likely to be expected to restructure more quickly due to their higher historical contribution to greenhouse gas emissions, and to contribute more to climate funds due to their higher ability to pay. Which countries are considered to be ‘developed’, and which are not, is therefore expected to be a contentious issue. Groups such as the G77+China have already stated that they want the Paris agreement to base these definitions on the 1992 Convention. However, other disagree,  arguing that the world has changed since 1992. While the IFLRY Climate Programme agrees that various countries’ levels of development have changed significantly since 1992, this does not mean that those already defined as ‘developed’ in 1992 should do less. Instead, they have an ever-increasing responsibility to reduce their own high emissions quickly, and to help others with the costs and technology of adaptation and mitigation.

Overall, the Bonn talks marked a point of progress for many parties. However, the disagreements that still exist over important issues, and fears surrounding the potential exclusion of observers in Paris, mean that working to promote these concerns is of increased importance. IFLRY Climate Change programme will continue to work on these issues in the run up to COP21, and recommends that all of IFLRY’s members and member organisations make pressuring their national governments on these points a priority in the coming months.