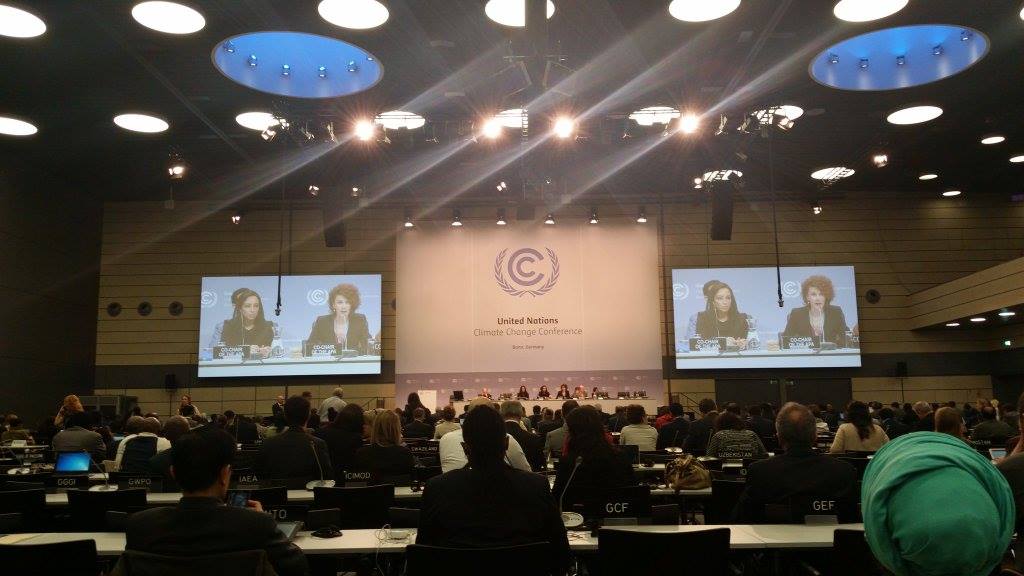 On the 12th of December, 196 Parties adopted the Paris Agreement: the first major international agreement on the issue of climate change since the 1992 Kyoto Protocol. On Earth Day, the 22nd of April, over 170 Parties signed the agreement. But this is only the beginning of the process. As with any big agreement, the devil is in the details.

That is why from May 16th to 26th, Parties met for the first official meeting since Paris, at the UNFCCC’s Bonn Climate Change Conference in Bonn, Germany. During the intersessional meeting, the UNFCCC’s two permanent subsidiary bodies, the Subsidiary Body on Implementation (SBI), and the Subsidiary Body on Scientific and Technological Advice (SBSTA) met, along with the first meeting of the newly formed Ad Hoc Working Group on the Paris Agreement (APA). The focus of all three bodies was on the steps needed to implement and operationalize the Paris Agreement. As observers, IFLRY’s Climate Change Programme had the opportunity to participate in the two-week conference in Bonn, attending the negotiations and side events.

During the first week of the conference, it appeared some Parties were more interested in debating the aspects of the Paris Agreement, rather than moving forward with the implementation. It wasn’t until the end of the first week on Friday afternoon that Parties were able to come to an agreement on an agenda for the meeting, and the following Monday the body agreed on the organization of work for the final few days they had in Bonn. Despite the time spent on informal consultations for the agenda during the first week, the first APA meeting laid the groundwork for COP22 in Marrakech to be more focused on action and further implementation.

Topics that made it onto the APA agenda for discussion included mitigation and NDCs (Nationally Determined Contributions), adaptation, and the global stocktake. The discussions and negotiations on NDCs were focused on defining the framework for tracking the effectiveness of the NDCs, with the global stocktake – the assessment – taking place every 5 years followed by an updated NDC submissions from the Parties. A number of Parties discussed coordinating and collaborating on their NDCs, causing certain Parties to raise concerns that the APA or the UNFCCC would be pressuring other Parties into specific NDCs. As noted, NDCs are determined at the national level by individual Parties and their respective governments.

Hearing from the experts

Throughout the meetings, negotiations and side events, Parties and observers heard from several experts and scientists on steps being taken by their organizations to ensure the goals in the Paris Agreement are achieved. For example, the World Bank has analysed nearly all of the NDCs submitted to the UNFCCC, and have now prioritized a variety of measures to ensure developing countries have the necessary assistance to meet their targets. Additionally, the World Resource Institute has conducted its own initial analysis of NDCs and their effectiveness in reducing the rate of temperature rise.

A highlight for our delegation was the dialogue session on ‘Action for Climate Empowerment.’ The two-day discussion provided an opportunity for NGOs, the business community, and governments from all levels to discuss the steps they have taken to engage civil society in climate action, and to educate the broader public on climate change and the individual actions they can take to combat it. A major focus on both days was how to better engage youth not just in climate action, but in the discussions and ongoing negotiations, while ensuring their voices are heard. It is no secret that youth played a crucial role in Paris, and youth were given the opportunity to address all three bodies of the UNFCCC during the plenary sessions and met with the incoming presidency of COP22, including the Executive Secretary of the UNFCCC. However, it is important that youth continue to be engaged and are provided greater opportunities to participate in the discussions and negotiations on the fight against climate change.

While highlighting the fact that African countries are fundamentally younger, Moroccan Foreign Minister and incoming President for the COP22, Salaheddine Mezouar, recognized it is absolutely crucial that youth remain involved and engaged leading up to and during COP22 for the sake of future generations.

The IFLRY Climate Change Programme will be participating in COP22 and applications for participation will be available in July – stay tuned for more information!

Justin Kaiser is the newly appointed Programme Manager for the Climate Change Programme. He is the former National President of the Young Liberals of Canada, and led the successful youth campaign that helped elect Prime Minister Justin Trudeau. Additionally, he participated as a delegate at COP21 and was the head of IFLRY’s delegation at the Bonn Climate Change Conference.