Zoran Zaev, leader of the Social Democrat opposition party, after he was attacked by protesters in the Macedonian Parliament.

Everything started two months ago, when supporters of the VMRO DPMNE party began daily protests across Skopje, the capital city of the Republic of Macedonia. They protestet protested because the leader of the Social Democrat party, Zoran Zaev, who is also the leader of of the opposition, announced that he reached a coalition agreement with two of the three ethnic Albanian parties in the Macedonian partliament. The demonstrators were led by intellectuals, actors, singers, directors of public institutions, and professors closely related to the government.

These protesters also criticized the ‘Colorful Revolution’, which happened in April 2016, and which destroyed the neo baroque buildings and monuments  of the Macedonian parliament, painting them with coloured polkadot blotche.

In Thursday, on 27 April, around 200 of them broke through a police cordon and entered Macedonia’s parliament, attacking MPs in protest of the election of Talat Xhaferi for new president of the parliament.

This is not something new. The country has been in political turmoil for the past two years, following a wiretapping scandal. The political crisis became more severe, when President Ivanov refused to give Zaev a mandate to form a government, because he supports an Albanian Platform (called ‘Tyrana Platform’) which, according to the President, is a platform that is undermining the independence, the sovereignty and territorial integrity of Macedonia.

The winner of the parliamentary elections in December was the conservative VMRO DPMNE party, who gained 51 Members of Parliament –  two more than SDSM, but they fail to form a coalition, and a parliamentary majority with the Albanian parties. In such circumstances, the second largest, political party, should form a government, something which already happened in 1992.

Traditionally, Macedonia’s government has been formed by a coalition between the Macedonian and Albanian parties that won the majority of electoral votes, but for the first time the Albanian Parties (DUI, BESA and Alliance for Albanians) have become kingmakers in forming the next government.

That was the real reason why Macedonian nationalists, who call themselves “ademantine” protested, after Talat Xhaferi (DUI) had been elected as speaker of parliament.

Besides the appeal by  EU Commissioner Johannes Hahn that ”there’s no time to lose“, five weeks before the situation escalated, the conservative nationalist party Internal Macedonian Revolutionary Organization – Democratic Party for Macedonian National Unity (VMRO DPMNE) has tried to postpone the election of the speaker using long and sisyphic discussions.

As time passed, the patience of the opposition and of the conservative demonstrators which were on the front of the Parliament house lapsed.

The opposition politicians decided to elect the parliamentary speaker by themselves, while the conservative demonstrators entered in the parliament by force, on the official entrance of the Parliament building, without identification, masked, while the police turned a blind eye. What is more shocking, they tried to annul the speaker’s election by attacking politicians that support Xhaferi’s election. 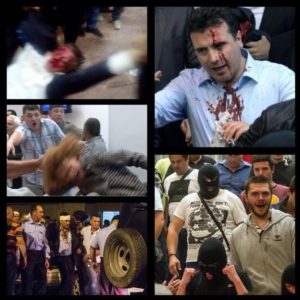 Broken glass littered the floor, broken TV cameras and microphones, reporters that covered the brutal and inhuman event were beaten. Traces of blood in the hallways and on the forehead of the potential prime minister Zoran Zaev and other Social Democrat MPs.

The most affected by the acts of violence was the leader of Alliance for Albanians, MP Ziadin Sela who was hospitalized, struggling for his life. The main target of the attack was the leader Zoran Zaev.

Police entered in the parliament after the riots erupted, but did not immediately seek to quell the attack. It is a public secret that the police is deeply politicized during the longtime reign of right-wing VMRO DPMNE. The media are also under complete control of the ruling party.

200 protesters didn’t allow the ambulance to help the injured politicians and there was no clear way for their evacuation.

It is verz worrying is that VMRO’s MPs gave directions to the demonstrators about where to move in the Parliament building.

The leader of the Albanian Democratic Union for Integration (DUI) Ali Ahmeti, left the Parliament building even before the election of his party colleague because in some way he expected such an atmosphere after the election of Albanian speaker.

Such reactions happened before. In June 2013, VMRO DPMNE supporters made unrest in the opposition-governed municipality of Centar. The aim of people brought to protest in front of the municipality building was to create a false image in the public that the newly elected mayor Andrej Zernovski, plans to demolish an Orthodox church built in the center of the capital city, which is on his territory. This time there was also a violent mob which surrounded the municipality building, breaking windows and protesting during the regular Session of the Municipal Council when they discussed the urban plan that covers the territory where the church is located.

Behind that false pretext was the intention to attack the mayor Andrej Zernovski, and the protest was ordered personally by Prime Minister Nikola Gruevski.

On the recorded tapes it can be heard how the Prime Minister ordered the Transportation Minister, Mile Janakievski, to chose a person who will physically attack the mayor of Centar, Andrej Zernovski.

”I am thinking that one person should take five to six slaps in front of the cameras on Zernovski. Let demonstrators enter in the municipal building and one of them should slap him three times, hard“, suggests Gruevski.

He also said that the person chosen to attack Zernovski will not be prosecuted for serious criminal offences because the slaps are not serious injuries.

Four years later, the church is still in place. Mayor Zernovski said that he never intended to demolish buildings and monuments which are part of the controversial project ”Skopje 2014“.               In the vicinity of that church there are already five other, older Orthodox churches.
The real reason of the attacks was the intention to manipulate the public opinion, presenting the mayor Zernovski as negative politician, because he announced a revision of the Skopje 2014 project. The project is highly corrupt and the newly constructed look of the center is a symbol of kitsch.

The mayor was not injured, as opposed to  the Macedonian MPs at midnight on Thursday 27 April, but the normal functioning of the municipal council then, as the normal work of the Assembly now, was interrupted.

A lot of controversies remain.

Why are demonstrators calling their initiative ”for a United Macedonia“, while at the same time they oppose the Albanians living in Macedonia? Why did police cordons allow protesters to destroy the Parliament building and to injure at least 77 people? Why were masked people allowed to enter the House of Representatives? Why were journalists that criticize the authoritarian government regime attacked? And finally, why did VMRO’s president, and the President of the State not condemn the violence in parliament?

It is more than clear that those attacks are anti-liberal in every sense, not consistent with democracy and they are unacceptable way to resolve political differences.

Maja Stojanova, PhD, is from the Centar municipality, in Skopje, Republic of Macedonia. She has a PhD in Political Science (field of research liberalism), of the Political Science Department of the Faculty of Law “Iustinianus Primus” at the State University Ss. Cyril and Methodius University of Skopje. She is also a public opinion researcher and a columnist.

If you would like to get in touch with Maja, you can email: maja_stojanova@hotmail.com