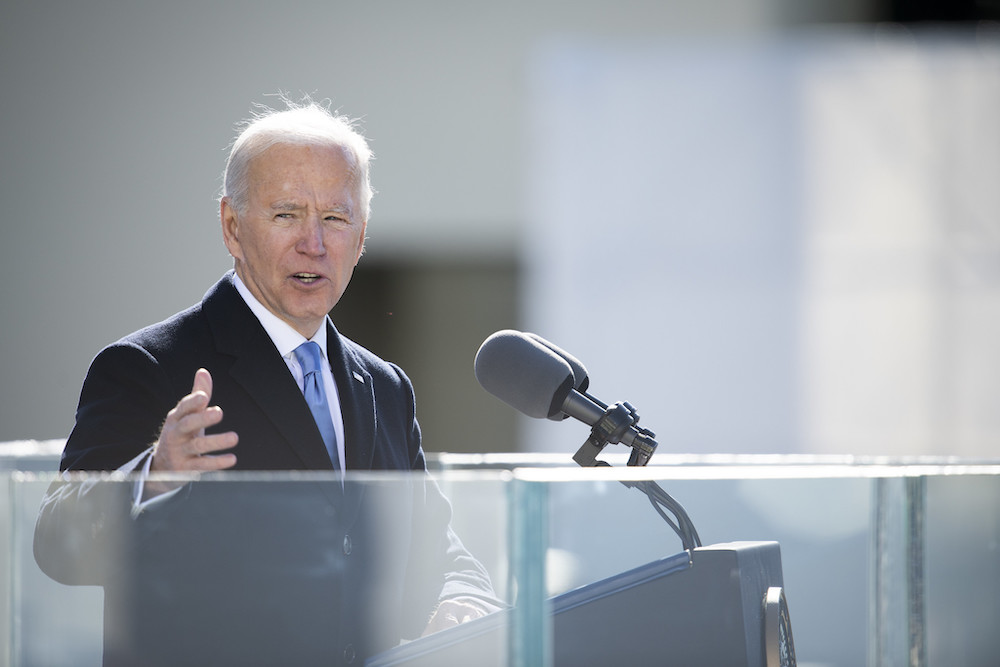 Joseph R. Biden giving his inaugural address at the US Capitol in Washington D.C. Source: Flickr, Chairman of the Joint Chiefs of Staff

In his inaugural address, President Biden remarked that “Today, we celebrate the triumph not of a candidate, but of a cause, the cause of democracy.” The scenes to which we were treated on our televisions on January 20th were, as one senator said, both routine and also miraculous; slightly less routine in this year of the covid pandemic without the large crowds in front of the US Capitol building and extending back along the Washington Mall, the parade from the Capitol to the White House, or in-person inaugural balls, but more miraculous than ever.

Even now, after his departure, the shock of Donald Trump’s presidency remains difficult to process. Though Trump never won a plurality of the votes in any election, he won enough voters in enough states in 2016 for America to swear in as president a man who was openly contemptuous of the liberal democratic values at the core of America’s traditional self-image. For four years, his effort to undermine those values and the rule of law was thwarted primarily not by the institutions of American government per se, but by his own clumsiness as a political neophyte without an education in government, law, or history. In doing so, and without universal political rebuke, Trump successfully removed taboos on authoritarian politics in the US, leaving open the question of what might happen under a similarly motivated president who has the expertise not to be his own biggest opponent.

The United States is now a country that has lived through the experience of a president who refused to accept the results of a democratic election and attempted to remain in power in spite of the will of the people, first through legal actions in the court system, then by pressuring state and local election officials to refuse to certify the results and, in the case of Georgia, to “find” enough additional votes to change the result, then by calling on the legislature and his own Vice President to exceed their authority and invalidate the election, and finally by calling on his supporters to stage a massive rally in Washington and march on the US Capitol building to disrupt the final certification of the election. While President Biden was correct in declaring in his address that “At this hour, my friends, democracy has prevailed,” that it was challenged at all remains something that would have previously been unfathomable, and in any case says nothing of the next hour and the next challenge.

The last time a Democratic president took office, in January 2009, President Obama inherited a country still reeling from the 2008 financial crisis that left the US in economic recession and with an unemployment rate of 7.6% and rising. It pales in comparison to the scale of the multiple crises facing the United States today. The coronavirus pandemic has killed over 450,000 Americans, more than America’s death toll in World War II, and a rate per capita that is significantly higher than the average across the developed world. America’s unemployment rate currently sits at 6.3%, but the rate of first-time unemployment claims hovers at approximately 1,000,000 per week, compared to roughly a quarter of that number before the pandemic. The police murders of George Floyd and Briana Taylor last year, and the subsequent extreme violence of American police in cracking down on mostly peaceful protestors in the summer, has exposed an even wider crisis in the state of American policing and public confidence in state institutions, at the very same time that these institutions must be relied upon to deal with the pandemic. The pandemic has caused an unprecedented hunger crisis in America: 23% of American households have experienced food insecurity since March 2020, more than double the rate in 2019 of 10.5%. Schools in America have been almost entirely closed for the duration of the pandemic, isolating children, stunting their learning, and forcing parents to care for their children during the day. This in turn has significantly set women back in the workforce as many have had to quit their jobs to care for their children at home, reversing 25 years of progress in female participation in the workforce and further increasing the gender gap in pay. Socioeconomic divisions have been rendered starker than ever,  as the pandemic has exposed in even plainer sight the division between those on the one hand who are well educated and work in knowledge-sector jobs that can be done from the safety and comfort of home, and therefore have seen little to no economic disruption from the pandemic, and those on the other who work physical or other in-person jobs, and who therefore face the risk of virus exposure from work, and who bear the brunt of pandemic-related job losses.

Donald Trump’s rise to power in 2016 was abetted by a populist sense that ‘the system’ did not work and was not capable of solving the country’s problems. As he left office, Trump still had a 38% approval rating according to the final public opinion surveys of his term. Historically when authoritarian leaders manage to successfully abuse the democratic system to empower themselves to end liberal democracy, there is almost always a popular sense that the liberal democratic system has somehow discredited itself, or otherwise is not up to solving the challenges that a country faces.

In his State of the Union address to Congress 77 years ago in January 1944, Franklin Delano Roosevelt, another Democratic Party president, said that “We have come to a clear realization of the fact that true individual freedom cannot exist without economic security and independence. Necessitous men are not free men. People who are hungry and out of a job are the stuff of which dictatorships are made.” Facing America’s greatest crisis in economic terms alone since the Great Depression and World War II, Biden would be well served to take inspiration and guidance from FDR. In a country beset with extraordinary crises, the test of his administration will be not only to meet the urgent needs of the American people, but in so doing in the post-Trump era, to restore the universal credibility of liberal democracy as a system capable of solving America’s problems.