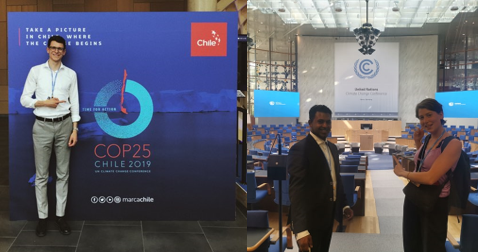 Delegates during SB50 in Bonn

Each year, between the big Conferences of the Parties (COP), the United Nations Framework Convention on Climate Change (UNFCCC) takes place in Bonn, Germany. Within the scope of the UNFCCC, experts and governments from all over the world come together to discuss recent developments in Climate Change (now also referred to as the Climate Crisis) and Climate Action. This year’s session focused on the technicalities of implementing the targets set in the Paris Agreement at COP21 in France in 2015 and served as a preparatory meeting for the upcoming UN Climate Conference, COP25, in Chile later this year. An important part of this discussion is the implementation of so-called Nationally Determined Contributions (NDCs). These NDCs require all parties to push on with their best efforts to lower emissions and keep global warming from rising above 1,5 degrees celsius pre-industrial temperatures.

As IFLRY has an observer membership with the UNFCCC, it is allowed to send a delegation to each of the UNFCCC’s conventions and conferences. For two weeks, we were therefore able to follow the negotiations and take part in the discussions and interesting side-events. Also, since IFLRY is an umbrella youth organisation, we can participate in YOUNGO, which is the official youth constituency at the UNFCCC. Are you confused by all these acronyms? No worries. This is exactly how we felt in the beginning. But to not bore you anymore: here is what we did during the conference:

As the title of this article suggests, the UNFCCC in June 2019 dealt primarily with measures and policies to reach the objectives that have been drafted in the Paris Agreement. Countries seem to be united in the understanding that our planet is in urgent need of new, ambitious solutions that effectively combat climate change. However, for anyone who thought saving the planet would be easy: Rome was not built in a day, either.

The most challenging thing is to find a consensus for global solutions regarding climate change. But as diverse as continents, regions and countries are, as hard is it to find a framework that does not favour one or puts the other at a disadvantage. Negotiations on Conflicts of Interests (COI) highlight this problematic nature quite well. Almost every body of the United Nations has a Conflicts of Interests policy in place to prevent certain players to engage in negotiations that may influence their businesses. Regarding climate change, some people propose to exclude e.g. “polluters” because they think they do not deserve a seat at the table. Others say that it is necessary to include them in order to find a joint solution for climate change. You see the difficulties that occur. An example of a heavily discussed topic during the negotiations was the framework of international carbon markets as a mechanism to combat climate change. Due to conflicts of interests between the negotiating countries, the issue remained unresolved.

But apart from these rather complex discussions, there are many side events that show how certain people or businesses created solutions to tackle climate change. One of these sessions dealt with the impact our eating habits have on global warming. A recently published report showed that about one quarter of global greenhouse gas emissions are caused by the way we deal with conventional agriculture and the import and export of food. The business “Impossible”, for example, invented a burger pattie that is produced without meat or other animal products. Also, IKEA engages in these discussions and tries to offer their 680 million(!) annual guests sustainable alternatives in their restaurant food. All experts agreed on: changing our behaviour can save the planet.

The climate talks in Bonn also served as an important preparatory meeting for the incoming UN climate conference, COP25, which will occur in Santiago, Chile in December this year. Many decisions agreed on in Bonn will be adopted at COP25. When the incoming President of COP25, Marina Schmidt, presented the expectations of the outcomes of COP25, she emphasized that science is non-negotiable and that we are in a state of Climate Urgency.  She invited scientists, members of civil society, indigenous peoples, representatives of the private sector and youth to participate in the negotiations in Chile. She pointed out the crucial importance of member countries making ambitious climate commitments and transforming them into action. Moreover, the COP25 is supposed to be a “blue COP”, meaning that the perspective of oceans will be incorporated in climate negotiations.

In conclusion, discussions and side-events during the climate talks in Bonn all conveyed the message that a deep transformation of our societal systems and economy is necessary if we want to reach the targets in the Paris Agreement and the UN 2030 Sustainable Development Goals. The models for change as used in the old days are no longer appropriate and definitely not effective enough. However, due to conflicts of interest between countries and sectors, the process of change often stagnates.

After our weeks in Bonn we are ever more convinced that an ecologically, socially and economically sustainable and viable system includes a higher level of transparency and inclusion in decision-making. So far, the youth strikers across the globe have showcased most ambitiously that we are experiencing a Climate Emergency and that Climate Action must happen now. Thus youth should be given a stronger position in decision-making. We need a change in leadership and less hesitation in decision-making. We should lose our fear of failure, because the only way to fail now is by failing to decide.

Let us no longer be afraid of change, but curious and ambitious!

The mentality of youth and youth organizations, such as start-ups, are less dependent on the paved paths and ways of decision-making.

Let’s find ways to push these ambitious and highly motivated (young) people and facilitate them in all possible ways, while placing them at the center of decision-making processes!

There are millions of young people who would rather start working on a change today than tomorrow, let’s give them a fighting chance to pick up the pace!

The IFLRY Climate Change Programme sends delegations to the UNFCCC’s world climate conferences in December as well as the preparatory conferences in June. During the first week of SB50 this June in Bonn, IFLRY was represented by Michel Nentwig, during the second week by Anna Korkman and Maurice Lagerwerf.