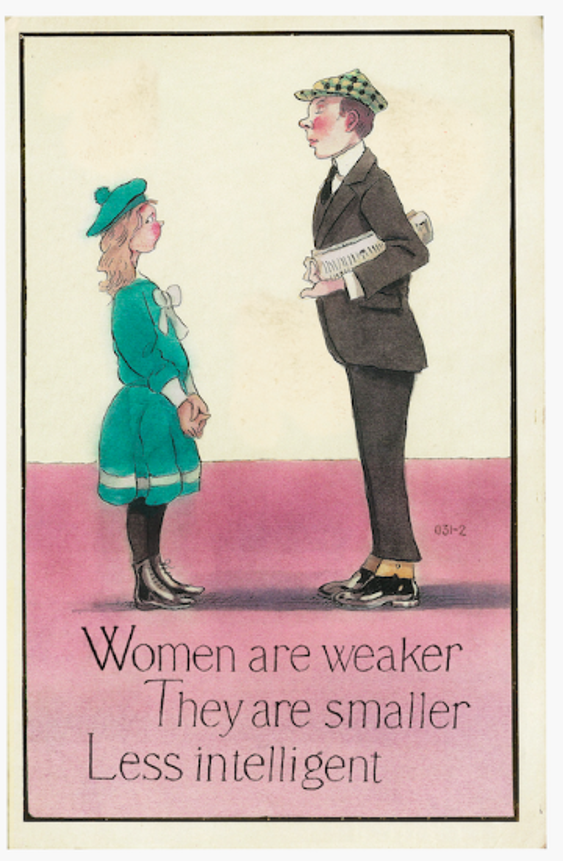 Since the 19th century, Feminism has achieved many of its goals, including women’s suffrage, greater access to education, the right to initiate divorce proceedings, women’s right to own property, the freedom to plan their families and so on. While these achievements are widely celebrated, some groups are claiming that feminism has gone too far and now disadvantages men on a large scale and seeks a higher status for women than for men.

The claim that feminism has ‘gone too far’ implies that in the past, feminist movements were more acceptable but the truth is that antifeminism is not a new phenomenon. It was present in the late 19th and early 20th century, during first-wave feminism in the form of resistance against women’s suffrage. There were people, not only men but women as well, who truly believed that women were too emotional and intellectually inferior to make a political judgement. They argued that giving women the right to vote would be a dangerous social revolution that would lead to societal decay.

Second-wave feminism began in the 1960s and suffered an even greater backlash. This time, feminists drew attention on a wider range of issues, including reproductive rights, domestic violence, marital rape, gender inequalities at the workplace, sexism and women’s objectification. They worked on getting the right for women to apply for mortgages and hold credit cards. Second-wave feminism was seen radical enough to scare people. The media started to depict feminists as man-hating, hairy-legged, bitter women. It was also criticised for only focusing on the problems of ‘white’ and ‘straight’ women and ignoring the needs of women who do not belong to this group. Eventually, the movement was ridiculed and declared dead in the 1980s.

The second wave was followed by the third wave in the 1990s, with the aim to correct the mistakes of the previous ‘wave’. Feminists embraced diversity and emphasised ‘girliness’ but were still attacked for being too radical and fuelling hatred. Today, we have movements like #MeToo that uses the internet to spread feminist ideas and yet again feminism is reaching cultural relevance. There are still many issues that women face every day. Women are fighting over abortion rights in the US and speak up against the normalisation of sexism. Feminists are also challenged in Europe by rising conservative and far-right parties advocating for traditional gender roles. For example, in 2017, Polish MEP Janusz Korwin-Mikke suggested in the European Parliament that ‘women should be paid less because they are smaller, weaker and less intelligent’. If we look at other parts of the world, gender inequality is even more concerning. In many developing countries girls still do not have access to education, they are less protected against sexual and physical abuse and are subject to child marriage.

These historical references and today’s examples show that feminism has never been fully accepted and celebrated and there is also a long way to go before we achieve full gender equality.

The Problem with Feminism

Feminism is often viewed as an ‘all-or-nothing game’ because feminists tend to exclude those who do not fully support them. Someone who believes in gender equality but does not support certain policies, for example reverse discrimination at workplace, is not an antifeminist and could still contribute to the success of women’s movements.

Because feminism often fails to promote diversity and does not allow for differences of opinion, many people have chosen to avoid the world feminism in their fight for gender equality.

Contrarily, we can find plenty of communities, groups and movements that proudly label themselves antifeminist. Feminism has triggered the rise of male supremacy groups such as the Return of Kings, the ‘Red Pill’ community that want to reverse women’s gains in moving towards closer equality. Another emerging ‘philosophy’ is called ‘Men Going Their Own Way’, that advocate for men to separate themselves from a society that is harmful to them. These groups are often very nasty and hateful, blaming feminism for the decline of Western civilization.

Feminism has indeed made a lot of progress in the last decades, especially in the Western world, and it is set to break the status quo. However, many believe that gender equality is a zero-sum game and women can only advance at the expense of men. That is why some men believe that they are going to be left behind. All these changes make the world harder for men and they are confused about their roles in society. As a result, we can observe the growing number of men’s rights movements such as the Fathers4Justice, that are genuinely concerned about gender equality and believe that it is only achievable if we introduce complementary changes in the lives of men. They work on getting better parental leave for fathers, support men affected by domestic violence, they raise awareness on gender differences in suicide rates and point out that women are more likely to be diagnosed with depression, but more men die in suicide. Due to toxic ideas about masculinity, that encourages men to be ‘strong’, men are reluctant to admit when they are struggling.

Masculinism and feminism are meant to be two sides of the same coin, they both work towards the same goal: the elimination of sex-based discrimination and expectations. The ‘current or next wave’ of feminism should pay more attention to men’s rights if the movement genuinely wants to work towards gender equality.