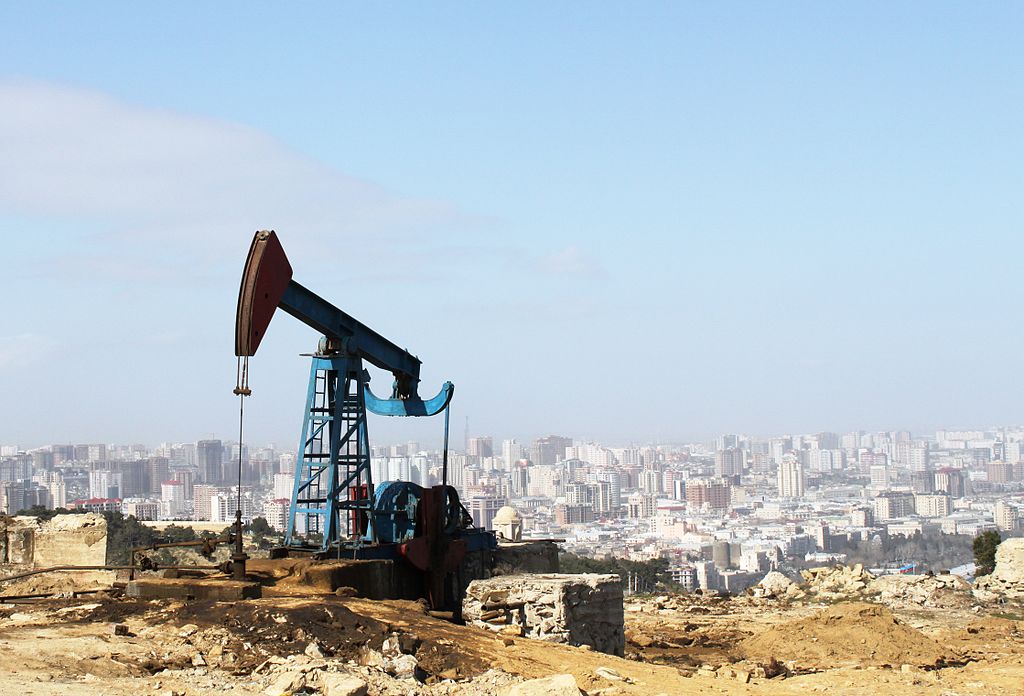 Oil Pump with Baku, Azerbaijan's capital, in the background.

Most of the countries that earn their income from oil are undemocratic.  Thanks to the large sums of money earned by oil, these countries tend to develop regimes that do not take into consideration human rights, serve only the interests of the ruling classes, and use the police and army to defend their interests. In brief: every penny wasted on oil by democratic parts of the world sustains regimes that disregard human rights.

Lately, the cost of oil has dropped at a remarkable rate. This has created difficult condition for undemocratic countries depending on oil. On the one side, it is possible to hope that as a result of financial problems these regimes will become weak and will finally collapse, but these processes will be grievous, not only for these regimes, but also for the people of these countries.

One of these oil countries is Azerbaijan, which is located in the South Caucasus. According to the constitution, Azerbaijan is a republic and secular state, but the government in this country – established in 1993, lead firstly by Heydar Aliyev and then his son, Ilham Aliyev – created a regime that violates democratic values and human rights flagrantly, using the resources of its oil income to keep itself in power.

In the last 23 years of dictatorship in Azerbaijan, attempts for revolution were made at least 4 times. But after the last attempt, which was made in 2005, Azerbaijani people have not attempted any revolution. It has been as if people agreed with destiny. In this country, which is governed on the basis of corruption, and where all the capital is controlled by one group, eventually, people were degraded, because they are forced into corruption in order to earn their living and survive. Today freedom, democracy, and liberal values are very strange and remote concepts for Azerbaijani people.

But now, due to decreasing oil incomes, living standards are falling and unemployment is increasing. The Manat, Azerbaijan’s national currency, lost nearly half of its value in December – driving up the prices of essential goods, as Azerbaijan imports most of its food. This is giving people a reason to think. Already the Azerbaijani people have begun to worry about their own future and future of their motherland. Further deterioration of the economic situation and remaining of oil prices at current low levels for a long time will probably increase the unrest. It could turn into protest and eventually may be revolution.

As the conditions for the Aliyev regime are getting more difficult, it is becoming more repressive. Unexpectedly, no political prisoners were released in December through a presidential amnesty ordinance; something which has been the tradition for many years. This happened while a bill about sanctions against Azerbaijan was heard in United States’ the House of Representatives. The bill proposes sanctions against Azerbaijan by the USA. It includes visa bans and asset freezes for Azerbaijani officials and their families, and a ban on financial transactions with Azerbaijan by any US government institution.

A government, which is able to evaluate such a thing properly, would choose not to be defiant of the United States and begin the process of democratisation.  However, the Azerbaijani government, losing its sense of reality completely, suggested, in its fraudulent parliament, countersanctions against the USA, citing reasons such as racism, rights violations and election fraud in the USA. Even the most passionate opponents of the USA would laugh at these allegations. The fact that these allegations are made by a dictatorship makes them even more ironic.

Clearly, at present times, relations between Azerbaijan and West are in a very poor state. The international standing of the country is writhing on the floor. As Russia is a fellow former soviet dictatorship, the Azerbaijani regime considers Russia a way out of this crisis. Russia is acting as a warrant for dictators in the world, and Azerbaijan wants to benefit from that. But with oil prices this low times are tough, even for Russia. I think that these processes are the result of the desire of democratic forces to expand their boundaries. They try to annihilate dictatorial regimes which, empowered by oil, create serious problems. Despite this however, I think that Azerbaijani people should not just sit and wait for annihilation of the regime that has been exploiting them for 23 years.

Azerbaijan was only slightly affected by revolutions in other former soviet countries, and, as it is a predominantly Islamic country, by the Arab Spring. These protests failed. Now Azerbaijan is being affected by the dramatic fall of oil prices. The opposition groups in the country hope that it can be decisive, because now the problem is not moral, it is material. In the beginning of the 1990s, Azerbaijani people were considered as “the most suitable people for market economy” in a report about the people of the former USSR created by the European Union. Material interests are decisive for them and they can make revolution in order to save their markets and income. Additionally, the new attack on the democratic movement is being noticed in the world. Azerbaijan is influenced by it as a country which falls into poverty by losing its revenues coming from the oil industry, as a country which borders Europeanisation in Georgia, and as well as one of the few secular Muslim countries. Although Russia poses a considerate obstacle to this, currently Russia is declining both economically and politically. Therefore, Russia is expected to be ready for new compromises through a slowdown of the civil wars in the Middle East. If Azerbaijani people want to be one of these compromises and to be a part of Europe like Georgia, they should not wait in silence, should stand up and fight.

The author’s name is withheld for their protection.