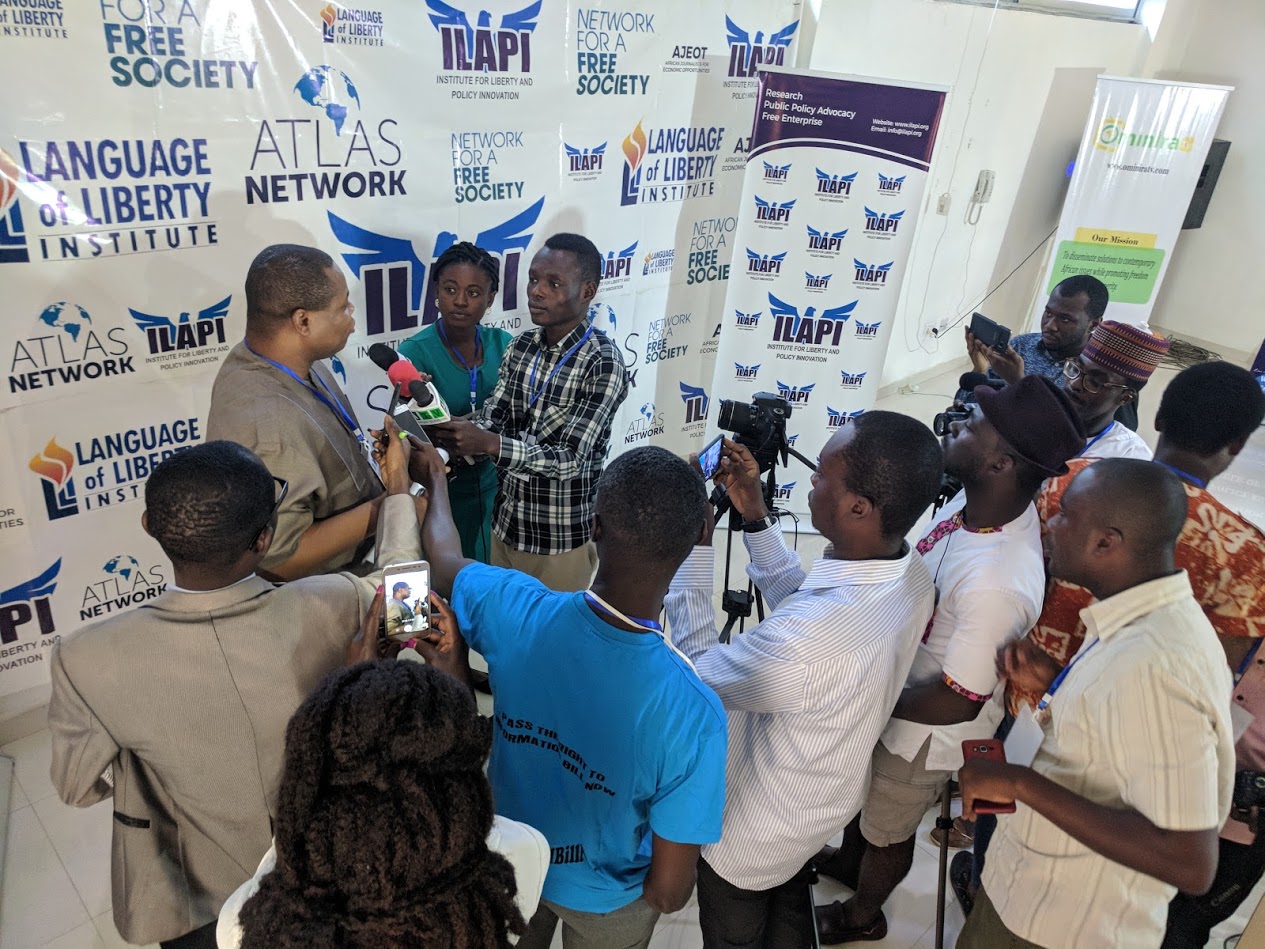 African Free Market Think Tanks, let me pose you a question: other than fattening your participants and talented speakers, and giving them an opportunity to take epic photos next to the guy/ lady adorning the latest fashion design in high quality fabric, how else do you create impact? How do you measure impact? Do you journey In-Mission?

Do not get me wrong. I love food. I also have the habit of taking pictures next to the best looking, best dressed individuals at conferences. As a proponent of individual liberty, I am certain you reckon there’s absolutely nothing wrong with that.

But to the main question. Africa faces a lot of challenges that mostly require policy solutions. It is therefore important that platforms are created where individuals and organizations can have a conversation on how to come up with sustainable solutions to such development impeding obstacles. The Libertarian perspective holds that: The role of government in a free society is to protect lives and property. Anything more than that is meddling. Note that I have not said regulate or control. But the status quo, especially in Africa, often points to a people so controlled and regulated that they find it difficult to make certain individual decisions.

However, there is hope for a better future. As a proponent in Africa, I’ve witnessed first-hand the increasing number of individuals and organizations that are convinced that free markets, individual liberty and limited governments can change the narrative from poverty reduction to wealth creation and improved living standards for all in Africa.

I must admit, it is a bit challenging to package the ideas of freedom in a manner that they can be accepted in every society. Often, when people hear about liberty or freedom, what comes to mind is a society of people with absolute freedom and, at worst, lawlessness!

That is not the kind of freedom propagated by us, free market advocates. What we are saying is that if you set an individual free, they have the potential to become the best version of themselves. This freedom is limited to respecting and not infringing on the liberty of another.

We believe that free trade can create massive wealth, get countries and individuals out of poverty and improve lives. We believe that if governments stop meddling in the affairs of private sector and businesses, there is a huge potential for job creation and empowerment. Less hurdles are placed in the path of development.

Now, in order to encode these messages in a way that is comprehensible and a little interesting, capacity building is paramount for agents of these good ideas. The Institute For Liberty and Policy Innovation (ILAPI), is a free market Think Tank based in Ghana, whose mission is to provide innovative economic research and pensive multidisciplinary public policy advocacy through intellectually inspired leadership to help create freedom and prosperity for a free society. Simply put, ILAPI, does public policy research and advocacy, to help develop and promote policies that inspire a free, peaceful and prosperous society.

ILAPI was founded four years ago, and in that time has been at the forefront of building a liberal movement in western Africa by intensive research and taking part in public policy discourse geared towards individual empowerment and the larger development agenda in Africa.

This is evidenced by among others, a recent award by Atlas Network’s Africa Think Tank Shark Tank competition which ILAPI bagged in 2017, in South Africa during the Africa Liberty Forum.

In the same year 2017, ILAPI conceptualized a program called African Journalists For Economic Opportunities (AJEOT). AJEOT is a two-day intensive residential certification training for journalists and prolific writers, aimed at helping them learn the tools used in the  advocacy of the economic principles of classical liberalism, and thus in a way shape their public policy discourse and guide them to question the status quo. The first group was trained in August 2017 in Ghana. On June 23 and 24, 2018, Journalists from Kenya, Ghana, Nigeria and Switzerland gathered in Koforidua, Ghana, for a training facilitated by some of the best facilitators in the global liberty movement.

ILAPI is also known to have the culture of nurturing talents and therefore some new talents were also given an opportunity to facilitate at the forum.

Facilitators took participants through topics including: Introduction to Classical Liberalism  ”Geopolitics”, Vicente da Camara from Switzerland; Tom Palmer spoke via skype  on ”Identifying Tools for Economic Journalism”.  Other speakers included Ebenezer Nii Tackie who spoke on ‘Understanding the Liberal Framework within the Realms of Public Policy Formulation; and Abdul-Rahman Dogbatey Sarpong  spoke on Media Entrepreneurship,  Evans Badu Boampong, Vice President, ILAPI who spoke about Media Censorship in Africa. Professor Brian Baugus also joined the training via Skype two speak on ‘Two Ideologies in One Country’, where he postulated that corruption and illegal systems were the two major problems hindering development of Africa.  Bright Nkyi, a research assistant with Ilapi and a young economist spoke on ‘Government and Inflation, and GDP.

In my capacity as President of a new Free Market Think Tank in Africa and a writer, I spoke on Internet Freedom and how restrictions to access and privacy violations affect economic and social gains that accrue from responsible use of the internet.

He argued that, subsidies by governments was a bad leadership approach to solving problems and also emphasized the need for African leaders to make it possible for citizens to own property in order to reduce conflicts. Evans Kissi-Appiah, a PhD candidate in Germany in Agri-economics, touched on the apparent disconnection between resource management and economic prosperity.

Mr.  Isaac Annan Yalley spoke about the Banking Economy and the reasons why banks fail. He argued that it will be more efficient if banks concentrate on delivering on quality services with fewer branches instead of focusing on opening more branches.

IMANI Africa President, Franklin Cudjoe, shared with journalists tips on how to unravel and communicate evils in the society without necessarily putting their lives at risk.

He went further to say that good journalism can help identify the gaps in policy and use their mediums to expose corruption. Mr. Kudjoe explained how corruption is executed through projects and contracts and citing the Kelni GVG as an example; he described the contract as a ‘’grand theft’’ being used to rob the limited resources of the state.

The event was climaxed with an awards night where participants were put into groups to answer questions and compete for an award. Individuals were also allowed to pitch business ideas of a media platform that would best carry and disseminate the ideas of a free society. ILAPI Ghana would fund the News  Website (portal) of the winner.

Economic freedom is a driver of economic empowerment   and respect for individual rights is the essential precondition for a prosperous society.

AJOET is a platform that equip journalists to do just that, break barriers to economic freedom and empower individuals for a free and prosperous society.

I am extremely honored to have been a speaker at the AJEOT 2018, in Koforudia, Ghana. I look forward to AJEOT 2019!

I ate Ghana’s best delicacies, learnt, networked, trained and I am now ready to continue the conversation on another platform created by the Young Africans For Opportunities, an African non-profit organization seeking to break barriers to economic opportunities and empower young professionals, entrepreneurs and students through public policy research and advocacy.

AJOET happens because of generous support from the Atlas Network, the Network For A Free Society, the Language of Liberty Institute, African Liberty Organization For Development (ALOD).

The Young Africans For Opportunities (YAFO) was actively involved in planning logistics towards the forum.