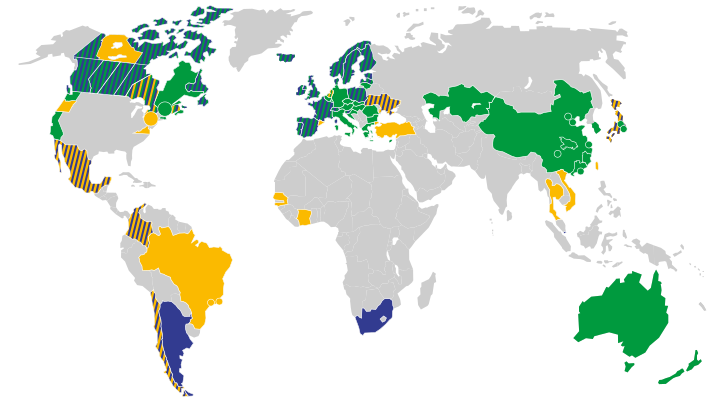 “You are failing us!”. According to climate activists, politicians have made false promises of
green growth, cheap change and looked the other way once sacrifice became inevitable. There
is an abundance of good reasons to agree with that. However, a blame race to the bottom in
the media won’t solve the feasibility conflicts of our governments. We need strategies to
discourage Greenhouse Gas (GHG) emissions in the economy and set paths to saving the
climate that provide a real opportunity for everyone.
There is one system that has proven to accommodate that, in both Europe and the United
States. Many shame it as opportunism and a fig leaf to avoid honest commitment. In reality, it
already helped us to overcome acidic rain from SO2 emissions and accelerates the European
exit from coal power like nothing else. The system I am referring to is, of course, emission
cap-and-trade! It is time to rebut the four most widespread misconceptions:

Fallacy #1: “Emissions do not and must never have a price!”
The direct implication of this statement is that climate policy itself has no price and that
emissions must be cut out of real life at all cost.
Well… obviously, emissions are not just the by-product of “luxuries” such as flights or
driving combustion cars. They literally are the price to afford vital heating, production of
medicine and the world’s top polluter – food.
Hence, if you are seriously going down this slippery slope — and some climate activists
do — you are putting lives at risk, as well as the welfare of less-developed countries and
lower-income classes. It is not a coincident that pushback against the green turn has come
from exactly those groups.
Right there, emission trading kills two birds with one stone.
First, putting a price on emissions makes it attractive to cut them out of production and
consumption where we won’t miss them. And since every man-made ton of CO2 less benefits
our climate, environmental goals can be aligned with socio-economic goals, including the
protection of those who can afford alternatives least. The gain, the incentive will make sure
that those who have other options are the ones pursuing them.
Second, accepting emissions as the price factor they are drives a market economy where
emission avoidance and even the reduction of the world’s atmospheric CO2 stock could
finally turn into a rewarding business! Given the fears green policies have unleashed among
affected individuals, ranging from the U.S. Rust Belt’s Trump voters to France’s Yellow
Vests, this seems key to any future solution.

Fallacy #2: “How can a trading system set the right tone if it allows for pollution
effectively?”
Emission trading leaves its participants with two options: They either decrease their own
emissions and get rewarded by selling their unneeded certificates. Or they fund the efforts of
others through buying their emission papers. Essentially, the purpose of this system is to retain freedom of choice. Hence, many critics
would reply that wholesale bans would be more resolute and therefore morally superior. But
this impression would be deceptive!
When Germany settled for its famous nuclear energy exit in the wake of the Fukushima
disaster, one disillusioning consequence has been the country’s reliance on coal-fired power
to compensate for the loss. As a result, German electricity did not only become more
schmutzy but also more expensive after the government topped up energy taxes to save the
day.
In 2019, the German think tank Agora showed that it was the newly won price stability in the
reformed EU emission trading system that actually drove back the sector’s pollution as never
before. What does that teach us? In the best case, bans may be able to achieve the same, but at
higher cost.

Fallacy #3: “Emission trading is unjust because it leaves pollution to the highest bidder”
This misconception assumes that those who can afford pollution would not stop it, if not
forced. However, this fundamentally contradicts the logic of profit maximization that most
polluting firms probably pursue. As a consequence, it becomes irrelevant if entrepreneurs like
to enact environmental protection. They will go for it if they are better off. Full stop.
And this is where we can see the sweetest spot of emission pricing: Instead of shaming calls
for livelihood and business sufficiency on one side, or promising eternal growth without
sacrifices on the other side, we can reconcile economic with environmental goals.
This way nobody on either side needs to flex their sense of moral superiority. Rather, we can
start at a foundation by recognizing opportunities in taking responsibility for the climate.

Fallacy #4: “Emission trading does not work because prices tend to be low”
It is easy to find examples where emission markets (like the European one) used to be
toothless tigers. Too many free certificates got issued, numerous exemptions for particular
lobbies and unfair allocation mechanisms have distorted the price. With the previous
“grandfathering” system, politicians even granted the biggest polluters certificates because of
their higher emission records.
However, complaining about the price level backfires if you willingly ignore the true
dynamics in the market. Emission prices are the result of the interplay between the capped
emission budget (supply) and the companies’ abatement costs for reducing emissions
(demand). Enforcing the former must be the goal of every sound climate policy. And the latter
evolves constantly through technological, economic and regulatory innovation.
Contrary to emission trading, a stable price – e.g. by taxation – might seem more appealing at
first sight. However, it ignores both dynamics simultaneously. In this respect, an ineffectively
low trading price simply reveals the system’s implementation flaws (just as in the Swedish
CO2 tax as well).