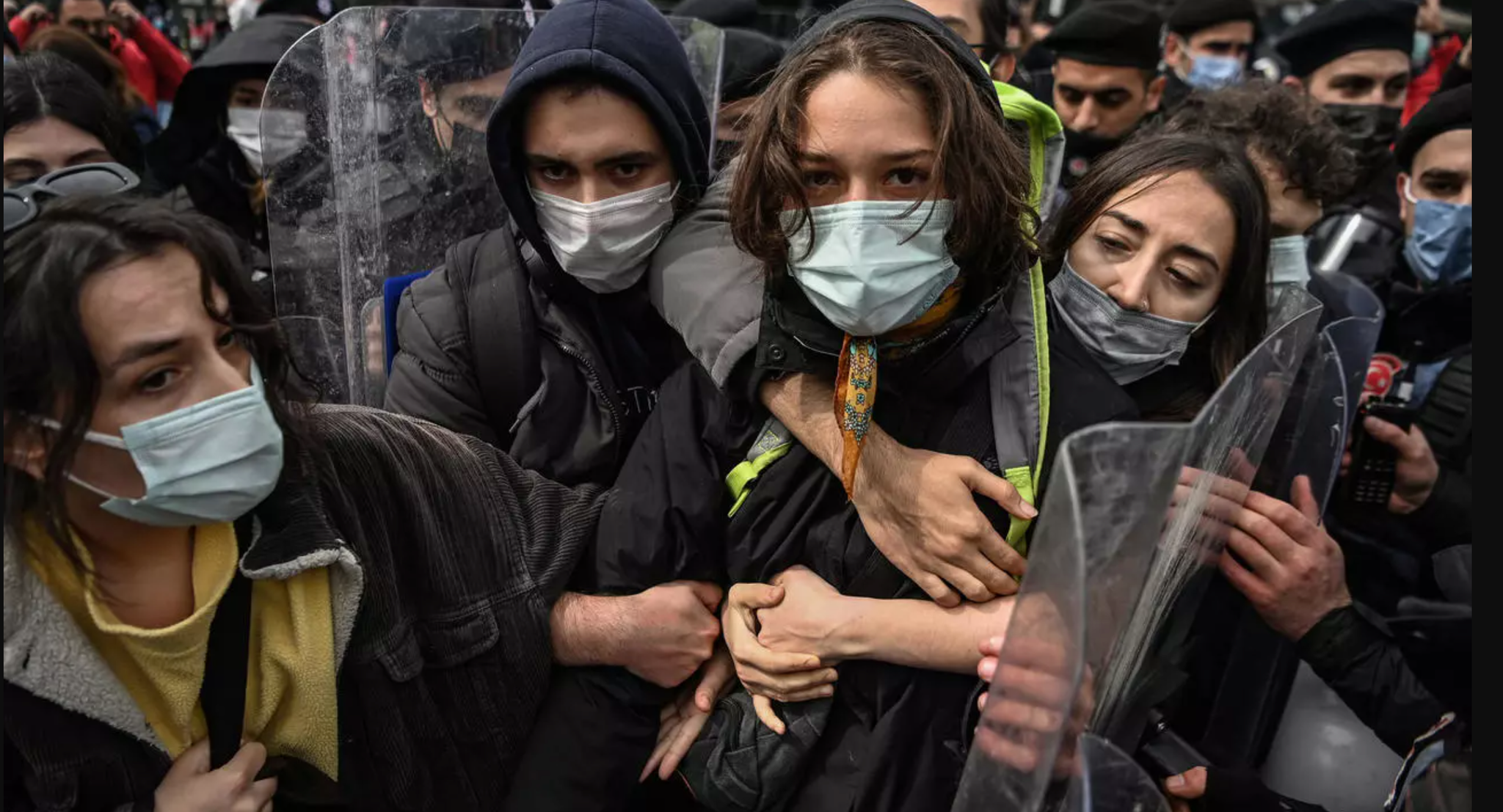 Student protesters are clashing with police to prevent them from detaining their friends. Manifesting the unflinching determination of Turkish women and youth to fight against the authoritarian regime for the sake of freedom.

The authoritarian regime of Erdogan has begun to increase its oppression of LGBTQ+ members and university students, reaching a level that carrying the LGBTQ+ flags are now deemed to be a  criminal offense by law enforcement. The appointment of a pro-Erdogan rector to one of the leading universities of Turkey, Bogazici University, led students and academics to rise up against Erdogan’s authoritarian rule. Thousands of students took to the streets to protest one-man rule in Turkey and rallied for freedom. Erdogan called lawfully protesting students terrorists and interior minister of Turkey Süleyman Soylu denounced students as “LGBTQ+ deviants (perverts)”. Erdogan’s ally, far-right nationalist leader Devlet Bahceli, also targeted students by calling them “poisonous snakes whose heads need to be crushed”. These statements showed themselves in effect at the brutality of police using rubber bullets, tear gases, and beating students to a pulp. More than 500 hundred students were detained without due process and 11 of them were arrested on ridiculous claims, and 8 of them were eventually released. One night, hundreds of riot police raided Bogazici University, which I consider as my home, and detained more than 59 of my friends by using excessive force.

In the aftermath of the event, I was appalled that once unthinkable actions were actually taken by the government without any foresight. The last time riot police had raided the Bogazici University campus was in the 1990s, the darkest times of Turkish politics in which basic human rights violations become part of daily life. The unpleasant memories of older generations who lived through the 1980s and 1990s once again came to the surface through the torture and persecution by Erdogan’s regime. It now seems clear that one-man rule in Turkey will use every power under its disposal to suppress dissidents. The youth and the women of Turkey do not have anything to lose and nowhere to go. There is literally no way out from Turkey. So, fighting against the fascist Turco-Islamic regime of Erdogan is not a choice. Either the triumph of defenders of democracy or the consolidation of one-man rule will shape the future of Turkey. Then what can be expected from the future for Turkey?

Erdogan will do whatever it takes to remain in power even if this means devastating the Turkish economy and socio-political institutions. In the recent election polls, Erdogan did not stand a chance against two popular opposition politicians Ekrem Imamoglu and Mansur Yavas, who are the mayors of the two biggest cities: Istanbul and Ankara. The worsening economy and his bad management of the pandemic caused his popularity to drop to the lowest levels. The opposition parties are more united than ever to topple Erdogan, and they are confident that they will win the next election. For this reason, they called students to not raise tension and discouraged them from using their constitutional rights to assembly and demonstrations. They passively criticized Erdogan’s unconstitutional decision to withdraw from the Istanbul Convention on preventing and combating violence against women. The opposition leader Kemal Kılıcdaroglu said that women will give their verdict at ballots and topple the ruling tyrant. So, once again the opposition avoided taking any initiative to wage a full-fledged struggle against Erdogan to defend women’s rights. This was mainly because the opposition fears that increasing social unrest and instability may help Erdogan to reclaim his decreasing popularity.

But Erdogan is no longer in a position to exploit mounting political and social crises, as they reveal the incompetence of his regime rather than externalities that do not allow him to do his job. The opposition’s rationale is fallacious and might lead Turkey to a more authoritarian regime, cementing Erdogan’s one-man rule. Because whenever Erdogan does make a controversial decision, he relies on the fact that the opposition in Turkey is incapable to take initiative and raise the stakes against the bully, as is happening now in student protests and the feminist movement. The opposition should understand by now that even if social movements cannot succeed in their goals, they may succeed in making the other side taste a scathing victory that would herald its demise. And it should be noted there is the possibility that Erdogan might refuse to concede the election results or change the rules of the game to ensure a win in elections. This is another reason to not solely trust the electoral system for fighting against the authoritarian regime, but to defend civil society at any cost.

As an active participant in the student protests, I’m aware of the fact that Erdogan will not take a single step back from his oppressive policies. Who knows if maybe the opposition is actually right about that rising social unrest helping Erdogan. However, there is one thing I’m absolutely sure of: if we do not stand firm against injustices and basic human rights violations for the sake of long-term benefits, we will unquestionably lose our integrity, and sacrifice the principles that we would like to see thrive. The European Union itself did make the same mistake and did not stand up to Turkey, or Hungary, hoping to not alienate them. As a result, there are two countries that did slide into one-man rule and a morally wrecked European Union has no sincerity for upholding democratic liberal values.

I myself also don’t know the answer to whether democratic values or one-man rule will prevail in the future, while Turkey has been at the whim of an unpredictable megalomaniac man. Each day, I do lose some of my optimism and my hope for the future. But I know for sure that the youth and the women of Turkey will not give up fighting and accept a political regime that has no respect for basic human rights. It is indeed a really very bad time to be a liberal or for anyone who simply demands a decent life in Turkey. Surely, though, solidarity overcomes everything.